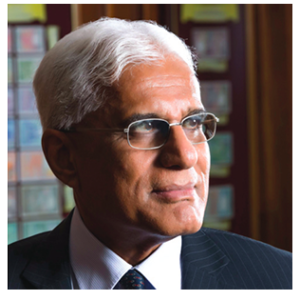 He  joined the Central Bank of Sri Lanka in 1973 as a Staff Officer and served as such for 16 years in its Economic Research, Statistics and Bank Supervision Divisions until 1989 and he was seconded to the Ministry of Finance and Planning between 1981 and 1989 to advise on Macroeconomic issues and Structural Reforms.

He was a member of the Monetary Policy Consultative Committee of CBSL from 2013 – 2015 and Advisor to the Ministry of Development Strategies and International Trade 2015-2016.  Dr. Coomaraswamy was also a Non-Executive Director of John Keells Holdings and Tokyo Cement Company (Lanka) PLC. In addition, he was associated with a number of research institutes in Sri Lanka.

Indrajit served as the fourteenth Governor of the Central Bank of Sri Lanka from July 2016 until December 2019.