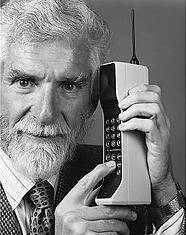 Martin Cooper, a researcher in Motorola, invented the handheld cellular mobile phone. He also made the first call using a handheld cell phone prototype on April 3, 1973, in front of reporters and passers-by on a New York City street. It landed Motorola’s mobile unit on the July 1973 cover of Popular Science magazine, which called it a ”new type of computerized, walkie-talkie-size portable.”

Well, cordless phones didn’t even exist on those days although non-cellular car phones had been used since the late 1950’s. Nevertheless, we know pretty well rest of the story, as mobile is now the DNA of our daily life. Ten years ago the New York Times ran an interesting piece: “Cell Phones Ruin the Opera? Meet the Culprit.”

But now the 80 year-old Martin Cooper criticises the “complexity” of the device he has invented. Last week he told a privacy conference in Madrid that today’s phones try to do many things for too many people. “Whenever you create a universal device that does all things for all people, it does not do any things well. Our future I think is a number of specialist devices that focus on one thing that will improve our lives, ” he told the Telegraph.

Misinformation in Bangladesh: A Brief Primer

Over the past decade, both internet penetration and digital media user base have increased substantially.

We present a dataset consisting of 3468 documents in Bengali, drawn from Bangladeshi news websites and factchecking operations, annotated as CREDIBLE, FALSE, PARTIAL or UN-CERTAIN. The dataset has markers for the content of the document, the classification, the web domain from which each document was retrieved, and the date on which the document was published.