Beyond the century old disease surveillance and notification in Sri Lanka

The present day disease surveillance and notification system in Sri Lanka, confined to a handful of diseases, known as Notifiable disease, and reporting large numbers of common cases, is what the British introduced in 1897 as part of the quarantine and prevention of diseases ordinance. This paper based surveillance and reporting system has its shortcomings that the health professionals themselves have voiced.

The Real-Time Biosurveillance Program (RTBP) pilot, during the first week of April, interviewed health workers and health officials in Kurunegala District to study the notification and response policy and procedures. These interviews revealed that in some occasions by the time health officials receive the notification to inspect the patient, with the infectious disease, at the patient’s residence, the patient had already died; health workers literally pull their hair trying to decipher the illegible handwriting on the paper forms; they also mentioned that they have to travel long distance from their villages to the Medical Officer of Health (MOH) office to pickup the paper forms with the patient’s information. These inefficiencies and excessive costs can be drastically reduced with ICT; with a technique as simple as a communicating the information via SMS text messages that costs Rupees 0.50 (fifty cents).

We asked health workers as to how they came to know of any adverse health events (i.e. rise in cases of a disease or an outbreak) either in their own or neighboring jurisdictions. Most of them replied “through word-of-mouth” while some said they came to know through the main stream media (TV, Radio, News Papers). Ideally they should be receiving first hand information from the health system itself.

An ICT system for alerting and situational awareness, is what the RTBP is introducing to the health system in India and Sri Lanka. RTBP adopts a global standard called Common Alerting Protocol (CAP) for issuing standardized alerts and situational awareness messages. Besides structuring complete all-media all-hazards messages, CAP provides grounds for interoperability. The CAP guidelines and preliminary design was adopted from the USA Center for Disease Control Public Health Information Network CAP Guide. 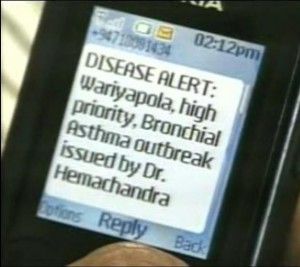 The RTBP introduced technology and procedures are a paradigm shift from the present day surveillance and notification system. The new paradigm introduces situational awareness and alerting, giving the health officials advance notice to decide on the actions that would make a difference, opposed to an unproductive set of formalities that are not aimed towards saving lives but just for pushing statistics up the chain.

In the RTBP, when a health event of interest such as an increased number of common syndromes or diseases are identified through the T-Cube Web Interface, authorized health officials issue a message to the restricted recipients (i.e. health workers) in the effected as well as surrounding areas. Then health workers will be aware of the present danger and can mobilize to respond immediately or chose to be vigilant and observe the situation. For example, a health worker in the effected area would know that he/she needs to investigate the cases in their jurisdiction; while health workers in other neighboring areas may conduct awareness campaigns to educate the public.

The CAP messages designed for health alerts and situational awareness are delivered via SMS, Email, and Web. The single input multiple output software system was developed by Respere Lanka and is embedded in to the Sahana Messaging and Alerting Module. Sahana is a Free and Open Source Software specifically designed for managing disasters.