I am not one for tradition, but we followed tradition to some extent, with the lighting of the lamp (associated with knowledge) and the general format of a book launch. One thing I insisted on was the need to open up for discussion. And discussion we had: 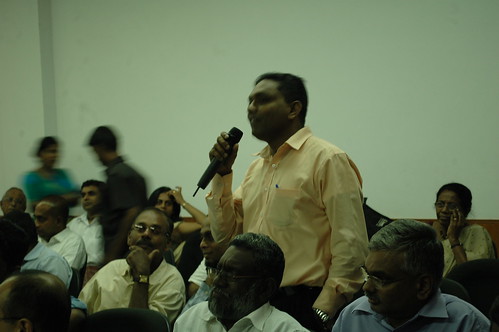 This was a faculty member from the University of Colombo who wanted to know whether I was peddling discredited neo-liberal (neo-classical is what he actually said, but I think neo-liberal is what he meant) prescriptions. I responded in concrete terms, showing that the government did not have apply tax-payer funds to stanch the losses of the “national” airline when it was semi-privatized (and actually earned dividends) while after renationalization we are losing more money in a year than the entire welfare budget.

So now the debate is joined. Hopefully it will continue in the media and at subsequent events.

LIRNEasia Chair, Rohan Samarajiva and I  attended the first drafting group meeting for developing the Asia-Pacific Information Superhighway Action Plan 2022-2026 on 25 May. The meeting was convened by UNESCAP, and chaired by Mohamed Shareef, Maldives' newly appointed State Minister of Environment, Climate Change and Technology.