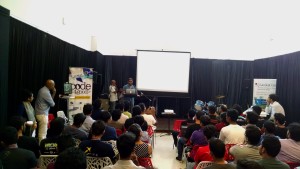 While the rest of the Sri Lanka slept peacefully, a considerable number of young and enthusiastic programmers gave up sleep this weekend – but for a good cause. Anyone dropping in to the WSO2 offices in Colombo the early hours of Saturday or Sunday morning would have been greeted by the sight of exhausted but determined coders hunched over laptops, tapping away. Among them were three teams working on a problem put forward by LIRNEasia. This was the scene of the Code4good hackathon which started on Friday evening (18th) and ran non stop until Sunday evening.

Though the intense work happened this weekend, preparation began much before. In the lead up to the hackathon civil society organisations were asked to identify problems for tech developers. At an event where CSOs were given the opportunity to pitch problems, LIRNEasia put forward the following issue and suggested solution relating to our work in agriculture;

“In Sri Lanka, a considerable amount of information relevant to farmers involved in the export sector is held within government departments and Ministries. How can we create a solution that enables farmers to receive important information vital to their work and also allow them to share information about disease outbreaks and other issues?

Solution: Create an app that has information related to crop advise, the ability to take geo-tagged photographs and to upload to a platform for identifying and tracking diseases, and a platform where farmers can advertise to exporters.” 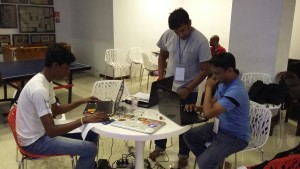 Following the pitch, three teams opted to work on the issue. And after more meetings with LIRNEasia researchers to discuss details, the teams got to work on Friday. After a weekend of coding, the hackathon concluded with presentations by all the tech teams and judging of the best solutions. The three teams working on LIRNEasia’s problem; teams ‘Five four loops’, ‘Y-knots’ and ‘Pending’, presented varying solutions (more details of each presentation will be put up shortly).

Team ‘Pending’ was selected as one of the best six teams and invited to participate in the next stage; an incubation process where they will be given coaching to help maximize the impact and sustainability of their product. LIRNEasia thanks all the teams for their hard work and looks forward to the next stage of the process.

Code4good is an Internews Initiative, implemented in partnership with International Alert Sri Lanka, SLASSCOM, and Google Developer Groups. LIRNEasia also gratefully acknowledges the assistance of the Ministry of Agriculture which is providing the data for the applications.

More details on Code4good can be accessed here