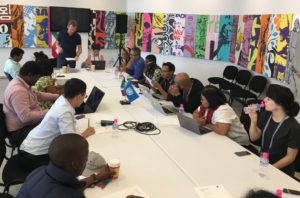 On the final day of UNIGF, IGF academy fellows participated in a debriefing activity to identify and look back on their journey to UNIGF 2016 and the way forward of the National Internet Governance Forums (NIGFs). At this debriefing the Asian fellows highlighted the importance of help with fund raising and having closed door meetings with potential stakeholders. Also, they said that its not possible for them to participate in all the calls of the IGF academy due to their busy schedules. The fellows suggested that its better if one fellow out of the two fellows from a given country participate in a call its sufficient and that the fellows can alternate. The fellows pointed out the importance of low emphasis in the structures and high emphasis on subject matter.

The next step of this project will focus on overcoming these identified constraints and strengthening freedom of expression in these countries through Internet governance processes.