Growing internet and mobile device penetration have transformed business process outsourcing. Workers no longer have to report to an office where they work a given shift for a fixed salary. The new dream is to work from home, as you want, when you want. You earn accordingly via any number of website and remote work platforms: online freelancing.

At LIRNEasia, we are looking at how technology can make life easier and better at the bottom of the pyramid. In 2015 and 2016 we studied online freelancing in Sri Lanka and discovered that there was potential for the youth of the island to become better employed through online work platforms. Now we’re looking at India.

In Bengaluru, a few cases stand out in our field experience. First, some urban freelancers have found means of circumventing platform fees. Second, women in semi-urban areas don’t seem to trust the internet enough to consider online freelancing.

Our work day on a Sunday in early June 2017 begins at 2.30pm. We are meeting with online freelancers based in Bengaluru city.

Raymond is the first to show up, on time. The other two are not yet here. India is playing a one-day cricket match against Pakistan, for the first time in a few months, starting 3pm. It’s unlikely the others will arrive, but we wait, Raymond with one sneakered foot on the other blue-jeaned knee.

The 29-year-old has an MBA and works full time as a Senior Business Analyst for an IT firm in Bengaluru city. He has been engaged in online freelancing “for years” on Fiverr. He works roughly two hours a day, in the evening, writing web content in a range from matrimony to horse betting sites. Raymond’s clients are mostly from the UK and Europe.

“The money is there,” he explains.

Devdas, another respondent, arrives a few minutes into the conversation. His short, broad figure is snug in a long-sleeved t-shirt, and his face is partially covered by a dark Nike cap. Devdas is 35, but the tiredness in his eyes and the hard-set line of his mouth say he’s seen more in the years.

He is in a somewhat different playing field to Raymond. He has a bachelor’s degree in Visual Arts but helps run his father’s company. His go-to for freelance work is Facebook – the public group called “PMIT Bangalore,” to be precise.

“There are too many options [on online platforms], it’s hard to pick which one to take up,” he says. To get gigs online freelancing on Fiverr, one has to be quick, always online, and among the lowest bidders with the highest recommendations. The atmosphere is very competitive. “I don’t want to bid low and bring the value of my work down,” Devdas shrugs.

PMIT Bangalore connects anyone in Bengaluru with everyone in Bengaluru. This is where Devdas prefers to get his work. Potential clients looking for freelancers will post a “wanted” advertisement on the group and if Devdas thinks the project is something he wants to do, he gets in touch with the poster. They sometimes move the conversation to email, and occasionally Devdas Skypes with clients. Bengaluru’s notorious traffic makes face-to-face meetings a waste of time. The only occasion Devdas is happy to engage in one is if the client can neither make a direct payment via deposit to his account nor send cash via a messenger.

Using Facebook to connect has one major advantage over online platforms. No middleman, no commission. Let’s say the visible gig fee on Fiverr is USD5. The platform charges the client (buyer) an additional 10% or USD0.50 (whichever is higher) processing fee. Then it pays the freelancer (seller) USD4, which is 80% of the stated task fee. Fiverr has made USD1.50. Another online freelancing platform, Upwork, also charges a service fee of 5%-10% of the full gig value. This is borne by the freelancer alone. Freelancer.in and Trulancer.in also charge various fees from the freelancer as well as the buyer. This is how the platforms make money.

Bangalore is at the forefront of the ‘Digital India’ initiative…

Finding and commissioning work on Facebook helps avoid the platform fees, but it also shifts transactional risk to the buyers and sellers. What Fiverr and other online platforms offer clients on either end of the deal, is first, a guarantee that the work will be done and second, that work done will be paid for.

This is an important part of the equation for Ilisha, a 20-year-old homemaker from Kumbalgodu, whom we met the next day. She doesn’t trust the internet much.

India is a global BPO and call center hotspot. Low operational and labor costs make it a favorite location for big western businesses looking to maximize profits. Even in the current context of job losses across India, the Indian Staffing Federation expects a rise in jobs in the IT, startups, telecom and BPO sectors. Part of the reason might be the hype of prime minister Modi’s ‘Digital India’. In Bangalore especially the optimism is very high. Many streets in Domlur town where our field team from Center for Knowledge Studies is working out of a small apartment, are home to startups and incubators. IBM, Dell, Microsoft and a host of other tech companies have offices next to a Goldman Sachs, at Embassy Golf Links Business Park, just five minutes down the road. 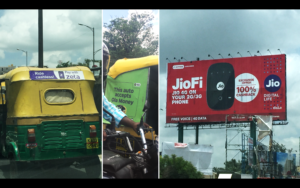 The investments are already making an impact, evident in how people get about their everyday business in Bengaluru. Our Uber driver swipes his phone screen every time we stop at a red light. Even three-wheelers (a.k.a. “autos”) promote cashless rides: “pay with Zeta”. Everyone knows what PayTM is. WhatsApp, Viber and Facebook are everywhere.

… but for some, the Internet is still hard to trust

In this context, Ilisha’s outlook on the Internet is surprising. But over the course of four days, we meet with and hear of many women who are similarly distrustful.

Kumbalgodu is a township less than 30km away from the heart of Bengaluru, home to around 10,000 people. The dirt road leading down to Ilisha’s house is so heavily riddled with loose rocks and potholes that our Uber driver refuses to drive on it. We get off and walk.

The house is tiny, the ground floor of a narrow three-story building. A man is stomping out just as we arrive. He is not happy that his pregnant wife has agreed to be interviewed by unknown people from the city. She is petite and fair, dressed in brightly colored clothes and her eyes are alert, scrutinizing.

“Yes, yes, a little English, can,” she laughs, apologetically inviting us to cram ourselves into her sitting room, to talk.

Ilisha has basic computer skills which she picked up during college. These were useful in her previous job. She worked at a local bank as a corporate attendant, supporting clients with loan applications, before she became pregnant and decided to quit. Ilisha uses the internet on her Samsung smartphone for downloading movies and music and chats with her friends and family on Whatsapp. She has no Facebook account, for fear of strangers, and although her friends shop online, she doesn’t.

They prefer people over platforms

Does she know what online freelancing is? “I have no idea about working online and earning money,” she says, laughing again.

She does know about working from home, though. For a while, soon after she moved to Kumbalgodu from her hometown in the historic Belagavi, Ilisha was self-employed. On one end of the 30-something square feet of her living room, stands a three-tiered rack where a stereo and some stuffed toys sit. On the other end, under a pile of fabric, brown paper bags and other knick-knacks hide an USHA straight-stitch sewing machine. Ashwini makes soft toys and sews sari jackets for her neighbors and friends. She can earn just less than INR 1,000 a week, which is the equivalent of a months’ electricity bill for the couple, doing this work.

She isn’t very interested in engaging in online freelancing.

“I don’t like it,” she says, firmly. “We don’t know who is giving the work. It’s better if we see and know the people.”

Ashwini admits that, now that she has stopped work at the bank, they are less financially secure than before. But her dangling earrings shake wildly as she explains that this is not a good enough reason for her to try and get work online. She knows people who have shopped online for one thing and had something else delivered.

“They have got cheated, so people don’t trust it,” she says passionately, in her native language, Kannada. “There is no difference between shopping and work.”

LIRNEasia Chair, Rohan Samarajiva speaks about the Future of Work, what role technology will play and what can be expected under a Digital Sri Lanka on the BISNOMICS Episode 112 DIGITAL – 31-OCT-2021.

The future of work decided by California referendum

One of the most contentious issues in platforms is the employment status of those who offer services on them: are they employees or independent contractors? If the former, in Sri Lanka they would qualify for employer contributed mandatory retirement savings; in the US, they would get health insurance and other benefits.