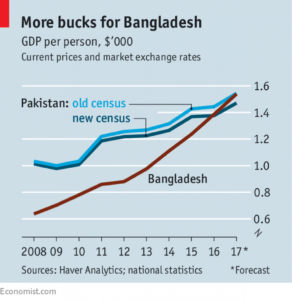 The economist celebrates Bangladesh’s achievements, caused in part by Pakistan’s census showing that it has more people than earlier estimated, thus decreasing the per-capita GDP. When the new population numbers are applied to the indicators that contribute to the ITU’s 2016 ICT Development Index, it is likely that the current virtual tie between Bangladesh and Pakistan will change to a significant lead for Bangladesh.

This is nonetheless a good moment to celebrate Bangladesh’s economic progress. Its annual growth has averaged more than 6% over the past ten years and has run above 7% over the past two. Industry accounts for 29% of its GDP. A country that once lacked cloth for shrouds now exports more ready-made garments than India and Pakistan combined. Working conditions are still far worse than they should be. They are also far better than they once were.