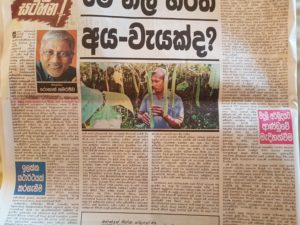 LIRNEasia has been working on agriculture since 2006. Most recently, in the context of the Inclusive Information Society project that is being wrapped up, I was talking about GAP compliance with an agri-producer connected to global supply chains standing in a paddy field in Kandy on which he was growing bitter gourd for export to Europe, where among other things, he described the various authorizations he had to obtain because he was cultivating on land designated as being for rice.

I recalled a conversation with Helani Galpaya several years ago upon her return from a field visit connected to our agriculture research. She said, we’re looking to solve information and knowledge problems, but the biggest barriers the farmers face is with regard to land.

The 2018 Budget Speech proposes to relax the constraints that have been artificially imposed on what farmers can do with their land. This proposal has come under fire from various pundits who believe that their food security and irrational beliefs about national self-sufficiency must be supported by constraining the liberty of farmers. Some commenters, acculturated to Budget Speeches being litanies of handouts of taxpayer money and new taxes, have complained that “except for certain incentives given perhaps under pressure, a strategically unaddressed sector in the Budget is the poor agricultural economy.”

Possibly as a result of the state-centricity of intellectuals even 40 years after the economy was liberalized, many commentators focused solely on the LKR amounts mentioned in the budget. However, we at LIRNEasia were aware of a USD 169 million agricultural modernization project that centrally addressed the issues related to connecting small holders to global supply chains. When compared to allocations for many other sectors, USD 169 million is massive.

The Budget Speech also included a proposal to introduce a weather-indexed crop insurance scheme, in the first instance, to six crops. We have been keen to explore the potential of insurance as a public-policy instrument in the context of disasters, though we have not done any work on weather-indexed insurance as such. One of the key constraints to its use is the lack of granular and regular weather reports. In a budget-related op-ed dealing with the contributions think tanks can make to important policy documents, I described our work on using attenuation of microwave transmissions by rainfall to generate weather reports.

So pulling all these strands together, I responded to a request to talk about the Budget for the most widely read newspaper, the Lankadeepa. It was good to be able to draw on ten years plus of research on agriculture to do so.