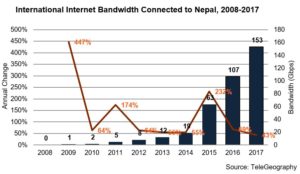 Nepal Telecom and Hong Kong-headquartered China Telecom Global has connected each other across Nepal’s northern border with Tibet through a mix of underground and all-dielectric self-supporting (ADSS) optical fiber cable network.

Activation of this link on January 12, 2018 has ended the exclusivity of Tata’s and Bharti Airtel’s international connectivity to the landlocked Himalayan state. Now Nepal can procure IP-transit, interconnection bandwidth, international leased circuits and cloud services at highly competitive rates from Asia’s one of the two carrier-neutral hubs at Hong Kong (Singapore is the other one).

Nepal has reportedly activated only 1.5 Gbps through the Chinese carrier, due to technical constrains of the ADSS link. The situation will dramatically improve once the $8 billion Sino-Nepalese railway link activates. Optical fiber embedded in this 400-km. of cross-border railroad for railway signaling will become Nepal’s de facto information superhighway through the diverse northern route.

Nepal now celebrates the ending of Indian monopoly through diverse Chinese route. State-owned monopoly Nepal Telecom, however, retains its dominance and keeps distorting the market. It is yet to show any sign of passing the savings it makes from China Telecom. 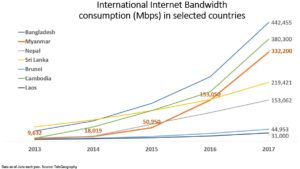 While discussing broadband policy with the Nepalese ISPs and civil society, I categorically emphasized on open access and cross-sector infrastructure sharing three years ago. I was little surprised to know that Nepal Telecommunications Authority (NTA) remains nonresponsive to the private sector’s plea for permission to connect the country with China.

NTA should note that Myanmar, the youngest player in regional telecoms league, has surpassed Nepal’s international bandwidth consumption in 2016. Most importantly, Nepal’s international bandwidth intake growth has also plummeted in 2017. The LTE users will keep banging their heads on the wall, unless the supply chain of broadband is comprehensively reformed in Nepal. It’s not rocket science.

Digital connectivity as an enabling factor in Asian resurgence

There is little debate about Asia’s increasing economic and political significance. The COVID-19 pandemic that originated in the Asian land mass has retarded, but not reversed, the progress made in taking millions out of poverty and in moving the centre of gravity of the world economy back to Asia, where it was until the 16th century.