The Consumer Affair Authority (CAA) of Sri Lanka held a National Public Private Dialogue to on making the digital marketplace fairer on the 15th-16th March 2018 to commemorate Consumer Day. Given the expected boom of eCommerce, and in light of the recent complaints received by the CAA the objective was to hear from both public and private stakeholders the pain points in order to develop a framework by which the CAA can assure consumer protection. ITC consultant and law professor, Michael Geist was entrusted with the task of pulling together aspects discussed during the two-days that ended in a workshop styled afternoon session. His recommendations will inform the Act that is currently being revised and form the basis of the framework requires by the CAA.
The objectives and intentions of the convening that LIRNEasia was invited to participate in was apt and timely. The execution could have been better. 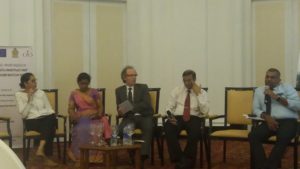 LIRNEasia’s contribution highlighted the use of eCommerce even in rural settings, where broadband quality of service is problematic; thus calling for attention to be paid to access and network availability, the fundamentals on which eCommerce is made possible.

In sum, the event had potential. One can be hopeful that the CAA, with the assistance of the ITC will promote the use of eCommerce while addressing issues of consumer redressal mechanisms, and, via the relevant authorities, matters relating to networks and payment gateways, among others, while being cognizant of not over-regulating.