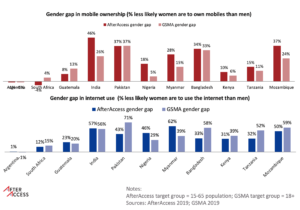 While the extrapolated gender gaps are not published in the report to compare with ours, the above is a comparison of the GSMA survey-based estimates of the gender gaps (though for the 18+ age group in each country, using a mix of random, quota and purposive sampling methods), versus the AfterAccess estimates (based on AfterAccess surveys of the 15-65 age group, using random sampling at all stages of sample selection). The overall trends between the two surveys follow a similar pattern, though there are some differences in the estimates in for example India, where the two surveys yield quite different estimates of the mobile ownership gender gap.   The AfterAccess estimates are generally higher than the GSMA ones, so perhaps the opportunity could be even higher than USD840bn.