Note: An earlier version of this article was featured in the Ceylon Today on 11 May.

Article featured in the Ceylon Today

The government’s response to the pandemic has evolved over time. While it imposed a stringent, national-level lockdown at the beginning of the pandemic, it has since moved towards a more ‘light touch’ approach citing the economic costs of a full lockdown.

The State Minister of Primary Health Care, Epidemics and COVID Disease Control (PHCECDC) released a set of guidelines on 23th April 2021, in response to the recent surge in COVID-19 cases. These guidelines are clear, explicitly stating which activities are allowable, and until when it is valid.  Concurrently, the government also began issuing ‘isolation orders’ to select Grama Niladhari (GN) divisions, following the footsteps of many other countries to impose localized lockdowns. Over 165 GN divisions of the 14,000 in the country were under isolation on 12 May 2021.

Lack of guidelines for isolated areas?

The government has in the past developed guidelines for those in localized lockdowns. For instance, those living in the Gampaha and Kalutara districts during the curfews imposed in October 2020 were (for a limited time) able to visit grocery stores on Mondays and Thursdays from 8 a.m. to 10 p.m., while those in Colombo and Kurunegala could do the same on Tuesdays and Fridays. LIRNEasia conducted qualitative research with people under lockdown in the Gampaha district in October and November 2020. This was conducted through phone interviews, and an e-diary methodology where respondents recorded their lockdown experiences over 14 days. This research indicated that these measures, along with others such as sending food lorries and giving handouts of Rs. 5,000 did improve the wellbeing of (at least some) people under lockdown.

The lack of publicity around specific guidelines for areas under lockdown could mean one of many things. At worst, it could mean that no guidelines are in place. This would be worrying, resulting in long term health consequences. At best, it could mean that the guidelines are in place and are being implemented but are not widely known outside the isolation areas. This, though not as worrying as the former, is sub-optimal. If the guidelines were well known, those residing outside the isolation areas could better prepare in case they were subject to the same.

Lead time to react to announcements

Lockdowns, curfews and isolation announcements have often been imposed ‘with immediate effect’ in many instances– this has been true of not only recent lockdowns, but also previous ones. While some of the respondents from our research got into the habit of stocking up following the lockdown imposed in March 2020, others were still caught off guard by the measures imposed in October 2020. Some of the latter had to try to obtain salary advances in cash from employers or borrow from friends and family. The sudden nature of the lockdowns also impacted the ability of businesses to plan their operations – many were unable to stock up supplies that people wanted, while others had perishable stock they couldn’t sell.

While the health guidelines issued by the State Ministry of PHCECDC are a step in the right direction, the government could draw inspiration from several other countries by making public how guidelines could change as the situation evolves. Singapore, for example, developed a circuit breaker (lockdown) exit plan with 3 phases. Guidelines pertaining to multiple areas including the reopening of schools and businesses, and home visits have been released for each phase. These need not be set in stone, and should be subject to many factors, including but not limited to, the COVID-19 case count, positivity rate, state of vaccine deployment, the capacity of the health system and state of the economy. Several countries have given an indicative date of when the guidelines should be enforced, with some caveats. England, for example, has aptly noted that the primary decision-making tool for moving between phases will be data, not dates. The approach does, however, encourage foresight and planning, and increased transparency.

Sri Lanka has been using a binary, on-off strategy pertaining to its localized lockdowns, but several others have used a more tiered approach. England, for example, has (when not in a national level lockdown) placed clearly demarcated localities into 4 different tiers, with tier 1 being at the lowest alert level (medium alert) and tier 4 being at the highest (stay at home) — each of these tiers had their own set of guidelines, detailing what activities could and could not be done. These are much like the guidelines issued by the State Ministry of PHCECDC, but with different rules for each of the tiers. A system of this sort that allows localities to enter and exit lockdowns in a more phased, gradual manner could be considered in the long run. The website of the Epidemiology Unit has a map categorizing areas into 3 tiers based on the number of cases reported in the past 14 days. The map, however, is seemingly based on Ministry of Health (MoH) areas – it is therefore reported at a level less granular than the GN division level at which isolation area orders are being issued at present.  Hence, while this could be used as a starting point if moving towards a system used in England, some consensus would have to be reached across the government regarding the level (e.g.: MoH area level vs GN level) at which these guidelines would be imposed.

Responding to the COVID-19 crisis has been difficult for many. Its volatile and uncertain nature has made planning even more challenging. It is, therefore, essential that efforts are made to simplify citizens’ planning and decision-making processes to the extent possible. Our research indicates that not all citizens were adequately prepared for sudden a lockdown, despite previous experiences. Disseminating better information could help, at least to an extent. Publicizing the guidelines that are applicable to isolated areas, for example, is a low hanging fruit. If strict measures are being enforced within the isolated areas, some lead time is necessary to allow people to prepare. Thereafter, lessons could be drawn from others such as Singapore and England to develop strategies to facilitate longer-term planning. 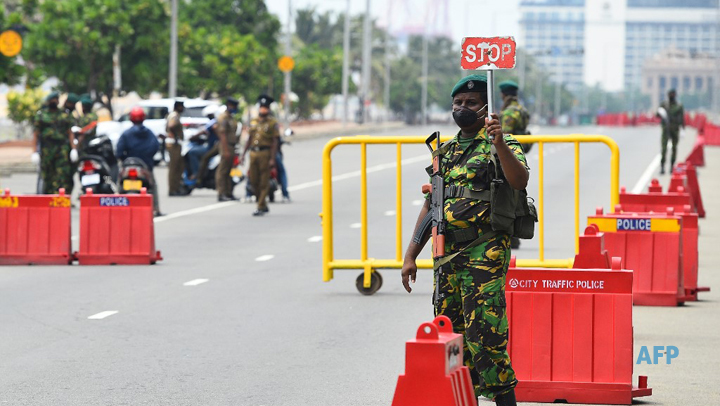