Access to education became a widespread concern with the onset of the COVID-19 crisis. And rightly so. A survey of Indians that we at LIRNEasia and ICRIER conducted between March and September 2021  shows that only 20% of school-aged children (i.e. those between the ages of 5-18) who were enrolled in the formal education system received remote education during pandemic-induced school closures. The survey is representative of households in India (except Kerala). Given the state-centricity of education delivery, access to education differed largely by state: Tamil Nadu and Maharashtra, for instance, outperformed its peers, with 41% and 38% of students having access to education during school closures respectively (Figure 1).

Access to digital technology became a precondition to access education for many during the pandemic. While online learning helped ensure a semblance of continuity of education to those who could access the necessary technologies, it became a gatekeeper to those who couldn’t. This included those without internet connectivity at home, those from households who could not afford to pay for the devices and data charges, and those without the right skills to correctly navigate online spaces. The implications of this digital divide was seen in India, with children from internet-connected households having nearly four times the access to education than children from unconnected households. However, it is also important to note that while connectivity contributed towards children accessing education, it did not guarantee it — 69% of children from households with internet connectivity did not receive education during school closures.

Differing experiences among those who did receive education

Experiences were also heterogeneous among the 20% of the enrolled students who were able to access education during school closures. Only 58% of those who had access to education during the school closures had any feedback from their teachers. Interaction and feedback –an cornerstone of learning– was greater amongst those who participated in live video classes through technologies such as Zoom, MS Teams, Google Meet or even WhatsApp. This at least somewhat replicated a traditional classroom experience, allowing for some interaction between and within teachers and students. However, it is necessary to remember that only few had this privilege — our research shows that only 11% of all enrolled students in India (or 55% of students who had access to education — Figure 2) engaged in such online real-time classes. Older students residing in urban areas, from wealthier families with more educated household heads were among those who were more likely to participate in such live classes. The 20% who could access education did so through multiple channels. However, there were some students who could not engage in live classes, who accessed education through other technology mediated means. This included receiving information and assignments to their smartphones via applications such as WhatsApp, receiving information via phone calls. While these methods may not have allowed for the level of interaction seen in live classes, they still served an important purpose in providing these students some sort of education during school closures. Our research indicates that children from 38% of households dropped out of the education systems, at least temporarily. Considering the many reports of some children engaging in earning activities alongside their parents during the school closures, access to education through this sort of channel likely prevented some students from dropping out of the education system altogether. 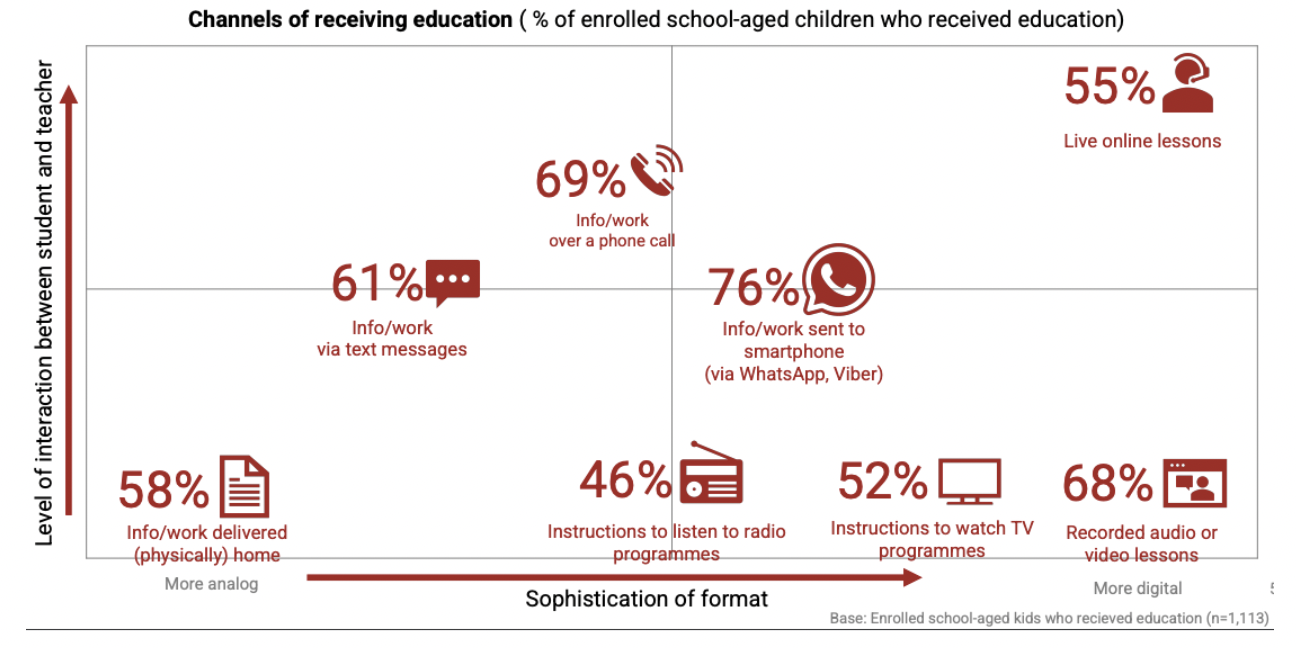 As schools reopen, it is necessary to ensure that no child is left behind — interventions will be required at multiple levels for this purpose. First, the children who dropped out of school must be (identified and) brought back into the system.  Second, opportunities to catch up must be provided for those who could not keep up with the curriculum — this not only includes those with no access to education during the school closures, but also  those who did not have as rich a learning experience as their more well endowed peers (e.g.: those receiving education who received feedback and interacted with teachers and peers versus those who didn’t).  Third, steps should be taken to convert the education system into one which is more resilient to external shocks. In the short term, cross-state learning could help states capitalize on and replicate relatively successful methods used by states such as Tamil Nadu and Maharashtra. However, longer term, strategic changes, including curriculum reform and infrastructure investments (as seen in countries such as Maldives) are also necessary, particularly if models such as blended learning are being pursued. These would require India to increase its budget allocation towards education, which in 2020 stood at 3.1%, lower than other BRICS countries such as Brazil, Russia and South Africa. It is possible to embark on the road to recovery in education — but it must take place considering, and responding responsibly to, the educational and psycho-social impacts of school closures on India’s children.