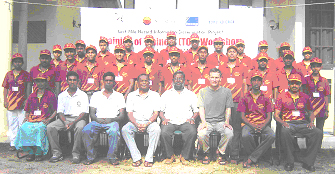 The first phase of the Last-Mile Hazard Information Dissemination (HazInfo) project funded by IDRC, was completed recently with the training of trainer component. LIRNEasia is implementing this project along with its project partners Sarvodaya, the largest community organization in Sri Lanka and TVE Asia Pacific (TVEAP), a non-profit media organization working in the Asian region.

LIRNEasia has undertaken a number of initiatives in the area of ICTs disasters and early warning post the Indian Ocean tsunami disaster of 2004. However, this is by far the largest project undertaken LIRNEasia in this area to evaluate the suitability of a number of ICTs (information and communication technologies) deployed in varied conditions for their effectiveness in the last-mile of a hazard warning system.

This project is being conducted as a research project with the intention that the findings from this study will inform the future design of early warning systems in Sri Lanka and in the region. An experimental research design is being adopted to evaluate the role played by a number of factors that contribute to the design of an effective last mile hazard information dissemination system, they include the following factors:

The proposed research design, available as a PDF document, will allow one to compare the effectiveness of the various ICTs deployed in different village contexts and in the absence or presence of hazard response training. Different combinations of ICTs and community mobilization will be tested out in 32 participating villages from eastern, western, northern and southern coastal areas of Sri Lanka. Along with the deployment of ICTs in the villages, training will also be provided to the villagers: 1) to identify local hazards so that villagers can be source of hazard information for locally developing hazards and 2) training for undertaking, warning dissemination, evacuation and other relevant actions when a hazard is reported 3) as well as for coordinating post-disaster relief operations.

The first phase of the project was launched on April 3, 2006 with the training of trainers (ToT) program at Sarvodaya’s Development Educational Center in Bandaragama, Sri Lanka. The trainers who will be prepared at this workshop will be working with villagers in 32 tsunami affected villages along the coast of Sri Lanka to impart hazard identification, mitigation and evacuation training. 24 trainers from the Shanthi Sena Peace Brigade were selected from 6 coastal Districts: Trincomalee, Batticallo, Kalmunai, Ampara, Hambantota, Matara, Galle, Kalutara, and Colombo. TVEAP conducted the training sessions, Sarvodaya provided the facilities, and Vanguard Foundation recorded on video selected sections of the 7 day program.

The HazInfo Trainers spent 7 days at the Sarvodaya Development Center in Bandaragama learning the theory in a classroom, participating in group exercises, and engaging in outdoors activities in the spacious coconut land, which provided an ideal setting for the entire training program.

The last two days of the ToT program took the Trainers to the west coast village of Thalpitya, Wadduwa, a location that had been adversely affected by the Indian Ocean Tsunami of 2004, and approximately 16 kilometers south of the Sarvodaya’s Head Office in Moratuwa. On the first day in the field, the trainers spent time mapping the village, talking to people in the village to identify the most likely hazards, and building an emergency evacuation plan for the village of Thalpitiya.

Thalpitiya Dalada Viharaya (Buddhist Temple), 1.6 km inland from the beach, was chosen by the Village and the HazInfo Trainers to be the common gathering place in the event of a disaster. After gathering at the temple the crowd spent time in a question and answer session with the HazInfo Trainers.

One of the Technology Partners – Dialog Telekom’s University of Moratuwa Mobile Communication Research Lab, demonstrated the Remote Alarm Device at the temple in Thalpitiya. People were thrilled to see a locally engineered GSM alerting device. The laboratory personnel also took the opportunity to get some feed-back from the HazInfo Trainers and Villages for improvements. Buddhi Weerasinghe (TVEAP) completed the ToT curriculum with a debriefing of the sessions that took place during the week.

Vanguard Foundation, the media partner for this project, has taken on the challenge of developing audio and video material as promotional and educational content in Sinhalese, Tamil, and English.

In the next phase of the project, HazInfo Trainers will provide training to 16 villages of the 32 selected villages as described in the research matrix in the project proposal: Evaluating a Last-Mile Hazard Dissemination: A Research Project.

The training in these villages will be completed before the end of June 2006. The selected ICTs will be deployed thereafter and more simulated drills will be held to assess the relative effectiveness of the different last-mile hazard warning technologies. The project is scheduled to end in 2007.