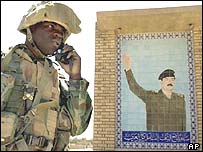 Iraq has sold three mobile phone licences for $3.75 billion to Kuwait’s Mobile Telecommunications Co (MTC), AsiaCell and Iraq’s Korek Telecom. The three firms, which already run networks in the war-torn country, made the highest bids in an auction in the Jordanian capital that began on Thursday.

TurkCell and Egypt’s Orascom had also bid for licences but dropped out of the race for one of the few sectors to thrive amid Iraq’s instability and crumbling infrastructure. The fixed-line network was hit by sanctions after Iraq’s invasion of Kuwait in 1990 and by bombing during the U.S.-led invasion in 2003. Less than 4 percent of Iraqis have landlines.
Read more.