Cyclone “Nargis” – time series before, during, and after

This article summarizes the series of event leading up to the impact, the events during the devastation, and other noteworthy information pertaining to cyclone Nargis’ encounter in Myanmar (Burma). 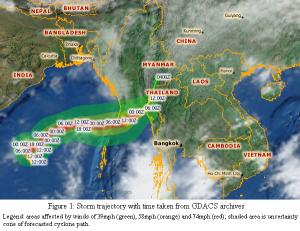 26-04-2008: The early signs of Nargis developing in the Bay of Bengal were detected by the Indian Meteorological Department (IMD) and the Joint Typhoon Warning Center (JTWC). “Way back on April 26, we told them a cyclone was coming,” B. P. Yadav said, referring to general warnings of a growing storm. According to a Inter Press Service (IPS) – IMD which keeps a close track of geo-climatic events in the Bay of Bengal and releases warnings not only to provinces on the Indian east coast but also to vulnerable littoral countries said it warned Myanmar (Burma) authorities of Cyclone Nargis’ formation and possible approach.

26-04-2008: The Asian Disaster Preparedness Center (ADPC) also provided Myanmar and neighboring countries with a model forecast of the storm, with accurate predictions of its landfall and strength, seven days before the cyclone hit, said Bhichit Rattakul, the executive director.

26-04-2008: Myanmar’s meteorology department started to send out warnings six days before Cyclone Nargis hit the coast, based on information from World Meteorological Organization (WMO) offices around the world, Dieter Schiessl (WMO Secretariat) told reporters in Geneva, where the agency is based.

27-04-2008: IMD and JTWC classified the storm as a Category-2 and named the first Sevier Indian Ocean storm of the 2008 season as ‘Nargis’, which initially tracked a northwestward path.

27-04-2008: Myanmar’s Meteorology and Hydrology Department posted a warning on its official website on April 27. When examined, the “warnings” section for “strong wind warnings” or any of the other sections on the website, it did not indicate of such a warning being posted. The screen dump dump of the page shows that the last warning posted was on March 01. Although the department said that a cyclone was forming in the Bay of Bengal and was heading towards Burma the information was not widely disseminated.

28-04-2008: IMD issued regular updates to the Myanmar government, said M. Mahapatra, the department’s cyclone director. “The system had intensified into a cyclone on April 28,” he said.

30-04-2008: A full 48 hours before the storm crashed ashore, Myanmar officials were provided with computer-generated plots of the storm’s likely route that accurately predicted its landfall, trajectory and strength.

02-05-2008: Bangladeshi authorities in six coastal districts were put on alert as the weather office predicted that the powerful cyclone may hit the country on Friday, according to BBC. 12:00 UTC – At 5:30 MMT, Cyclone moves ashore in the Ayeyarwady Division of Myanmar with winds picking up to 215Km/h, classified as a Category-4 cyclone as it approached landfall of Pagoda Point – Myanmar.

The very severe cyclonic storm “NARGIS” over eastcentral Bay of Bengal moved further eastwards and lay centred at 2030 hrs IST (19:30 MMT) of today, the 2nd may 2008 over Myanmar near lat. 16.0º N long. 95.0ºE about 160 km southwest of yangon. The system is likely to move in a east-northeasterly direction and weaken gradually. Under its influence, rain/thundershower is likely at many places with isolated heavy falls over Andaman & Nicobar Islands during next 24 hours. Gale wind speed reaching 60-70 kmph is likely over Andaman Islands and adjoining sea areas during next 24 hours. Sea condition will be very rough to high around Andaman Islands. Fishermen are advised not to venture into the sea. This is the last bulletin for this system.

“The storm surge was the major cause of the disaster,” said Dieter Schiessl, director of the World Meteorological Organization’s disaster risk reduction unit. The destruction of lives and property was blamed on the 3.6 meter (12 foot) high storm surge that accompanied Cyclone Nargis.

Early suggestions that the number of deaths were in the hundreds were quickly revised upwards by authorities in Yangon, currently standing at 23,000 with reports indicating that the final death-toll could be as high as 63,000. The state media says more than 42,000 others were still missing with estimated 40 percent of the dead or missing believed to be children.

Cyclone’s damage was concentrated over an area of about 30,000 square-kilometers (11,580 square miles) stretching along the Andaman Sea and Gulf of Martaban coastlines. This stretch is home to nearly a quarter of Myanmar’s 57 million people.

Burma’s military leaders must feel especially threatened. The five states hardest hit by last weekend’s cyclone produce 65% of the country’s rice, 80% of its aquaculture, 50% of its poultry and 40% of its pigs.

Storm packing winds of 190 kmp (120 mph) had left the delta region submerged under six-metre (20-foot) waters higher than the tree-tops — and left countless corpses rotting in the heat.

This map taken from the UNOSAT archives provides the names of townships in the path of Nargis.

The government of Myanmar told the United Nations it warned its population of the devastating cyclone that struck over the weekend, but it lacked radar to predict the high tidal waves that caused most of the fatalities, the U.N. weather agency said Wednesday. According to Howrah, Myanmar told the worldwide organization that it had warned the population in newspapers, television and radio broadcasts of the impending storm, he said.

Schiessl said his organization was unable to verify how the warning information was used by the authorities and “what really reached individuals.”

Dr. Smith Dharmasaroja, chairman of Thailand’s National Disaster Warning Centre, said the Myanmar government’s response was insufficient and he believes that the Myanmar government also does not have proper coastal radars to detect that a cyclone is approaching. “That’s why they are not able to prepare in time”, Dr. Smith added.

The Myanmar government first learned that a cyclone was brewing in the Bay of Bengal nearly a week before it slammed into Myanmar. According to Mizzima, an outfit specializing in Myanmar related news and media mentioned that the State-run media did not issue a cyclone alert until the afternoon of Friday, May 2. The storm first struck the Irrawaddy Delta in late afternoon Friday and swept into Rangoon early Saturday.

“Though my daughters said they knew about the announcement, I was not aware of the cyclone because I am not interested in watching TV, and there was no public announcement in the locality,” said a Rangoon resident whose house was smashed by a falling tree.

Burmese radio and television carried vague warnings, with little information about the approaching storm, and offered no instructions on how people should cope when it struck.

Tropical cyclones have hit the country on average only once in 40 years, a reason that preparedness may not have been a top priority for Myanmar, he said.

The only concession to a people reeling from the devastation caused by the cyclone is a shifting of polling day from May 10, as scheduled, to May 25 in some of the worst affected areas like Rangoon and the Irrawaddy Delta. It was indicative of the ruling junta’s calculated concern for its own power and its readiness to manipulate the media solely for propaganda purposes.

“… will this topple the Burma junta?“