Telecentres: Panacea for all woes or over-hyped and under-delivered phenomenon? 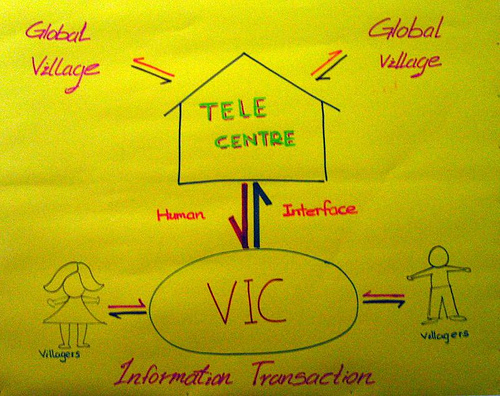 Nalaka Gunawardene calls mobile phone a murder weapon. According to him, what the mobile has already stabbed, and is in the process of effectively finishing off, is the development sector’s over-hyped and under-delivered phenomenon called the ‘telecentre’.

So how is the mobile phone slowly killing the telecentres, asks he, into which governments, the United Nations agencies and other development organisations have pumped tens of millions of dollars of development aid money in the past decade? Well, it’s rapidly making telecentres redundant by putting most or all of their services into literally pocket-sized units. If everyone could carry around a miniaturised, personalised gadget that has the added privacy value, why visit a community access point?

The editor of state owned ‘Daily News’ may not necessarily agree. Excerpts from his editorial today (May 20):

President Mahinda Rajapaksa’s avowed goal to give every Sri Lankan the chance to access the outside world through information technology if realised no doubt would be a huge achievement for a third world country such as ours.

Speaking at a ceremony to mark “International Telecommunications Day” at Temple Trees on Saturday the President sounded optimistic of achieving this goal when he said that the “Computer Literacy” rate which was just 5 per cent when his Government assumed office has now reached 20 percent due to the “Nenasela” (= Local telecenter- Ed) programmes. This is certainly a commendable level of achievement and signify a gradual shift in the emphasis of the country’s education structures which earlier catered to improving only the literacy rate ‘literally speaking’ which hardly carried any value in the local or international job markets.

So are telecenters a solution to all our problems or over-hyped and under-delivered phenomenon?

LIRNEasia may have its own view, but nevertheless like to hear our intelligent readers.