LIRNEasia researchers at ITS 2008, Montreal, Canada 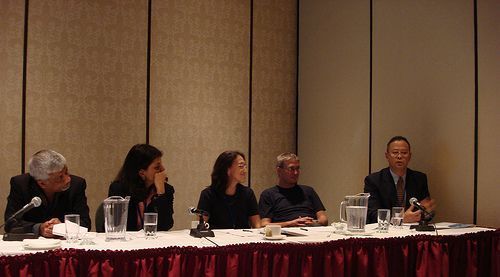 LIRNEasia researchers participated at the International Telecommunications Society (ITS) 17th Biennial Conference in Montreal, Canada, from June 24-27 2008. The theme of the conference was on, ‘The Changing Structure of the Telecommunications Industry and the New Role of Regulation’.

The picture above shows Professor Sudharma Yoonaidharma, Commissioner, National Telecommunciations Commission of Thailand commenting on the presentations made at the second of the two LIRNE.NET sessions, watched by (from left) Rohan Samarajiva and Payal Malik from LIRNEasia, Roxana Barrentes from DIRSI and Anders Henten from LIRNE Europe.  The session was chaired by Hank Intven, Partner at the leading Canadian firm of McCarthy Tetrault (not in the picture).

At a double LIRNE.NET panel, entitled, ‘New regulatory approaches in the face of rapidly changing demand: Research from four continents presented by LIRNE.NET’, Rohan Samarajiva made a presentation on ‘Banded forbearance: A new approach to price regulation’; Helani Galpaya presented a paper on ‘Non-owner teleusers at the bottom of the pyramid (BOP) in emerging Asia’, based on LIRNEasia research carried out in mid-2006. Payal Malik presented a study on ‘Scrapping the access deficit charge in India: A case of tardy regulatory response’.

Researchers from sister-networks, Research ICT Africa (RIA!), and the Latin American and Caribbean Regional Dialogue on the Information Society (DIRSI), also presented their research carried out in their respective regions during these sessions.

Payal and Rohan presented a paper on ‘Re-examining universal service policies in telecommunications lessons from three South Asian countries’ during the session on ‘Universal Access: Definitions, Delivery and Alternatives’.