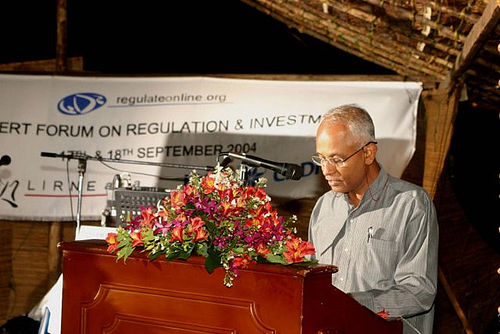 Lalith Weeratunga, Secretary to the President of Sri Lanka, was recently elected to the chair of the Information and Communication Technology (ICT) Committee of ESCAP – the Economic & Social Commission for Asia and the Pacific

He elaborated that the ‘e-Sri Lanka’ initiative has enabled people to obtain authenticated copies of Death, Marriage and Birth Certificates – essential documents within a few minutes.

Responding to a question that some rural tele centers have been dysfunctional Weeratunga said there are about 600 Telecenters and it’s not unusual for a few to fall behind.

“However we will relocate them if necessary”, he said.

Commenting on the Sri Lankan expertise of the diasporas, Weeratunga said that there are those who want to help but in actual fact most of them are really in search of jobs.

“We cant pay them the salaries they expect but if anyone wants to genuinely help they could log in to the ICTA web site (www.icta.lk)” said Weeratunga.