Recession in North, but emerging Asia is expanding – The Economist 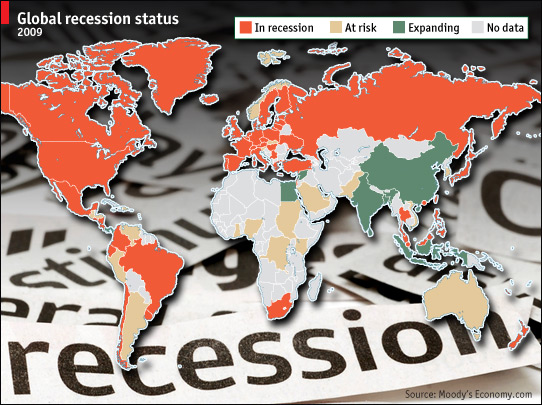 Anybody could have guessed this. It is unimaginable that entire world will go through a recession simultaneously. Not everyone can be losers for too long. There should be winners somewhere. For example, what would the US firms that find their human resources costs, logically do? They outsource to Bangalore. So the BPO industry in India grows. Peter’s loss becomes Patel’s gain.

The Economist today presented the evidence.

MOODY’S Economy.com has mapped the geographic spread of the worst global downturn since the Depression. All of North America is in recession now. In Europe only Norway, Slovenia and Slovakia have avoided a similar fate, although Moody’s reckons these countries are on the brink of a downturn. Emerging Asia looks cheerier, although the small export-led economies of Singapore and Hong Kong are shrinking, as are Malaysia and Thailand. Even the BRICs are looking a bit diminished, with downturns in both Brazil and Russia. At least India and China are growing (the latter at a pace that is causing worries about overheating). Data for Africa are spotty but the continent’s biggest economy, South Africa, is in recession. The IMF expects global GDP to shrink by 1.4% this year, with rich countries’ economies contracting by around 3.8%.