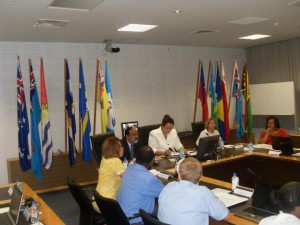 LIRNEasia has achieved a milestone in the Pacific Region by launching the office of the Pacific ICT Regulatory Resource Centre (PIRRC) on 10 November 2011 in Suva, Fiji. Earlier this year, LIRNEasia won the contract to establish the PIRRC with initial funding from World Bank and relocated its Senior Policy Fellow M. Aslam Hayat to act as PIRRC’s founder director.

The PIRRC is hosted by USP at Level 4 of its Japan-Pacific ICT Center in Suva, and is funded by World Bank and managed by LIRNEasia. The launch of the Centre was followed by two-day working session. Rohan Samajiva CEO of LIRNEasia shared his experience with the Pacific Regulators challenges of Broadband, Alternate Dispute Resolution/Alternate Regulatory Practices. He also presented ICT indicators of the region.

The role of Centre is to collect key industry statistics and issue periodic reports on the state of telecommunications competition in Pacific Island countries, develop information packages on priority regulatory topics including those where technical skills may be required in analyzing industry trends, provide advisory services in response to country requests and to identify additional sources of expertise and issue best practice statements on telecommunications policies, laws, implementing rules and regulatory instruments. 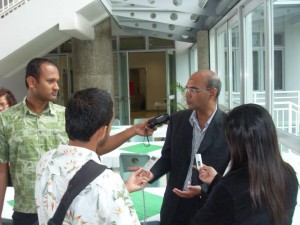 Aslam Hayat talking to the media