Myanmar is last in telecoms: What can be done 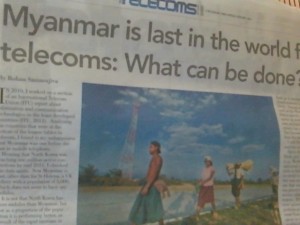 A short piece I wrote on my own time (IDRC is subject to Canadian government restrictions against any expenditures of Canadian funds in/for Myanmar) was just published in English in the Myanmar Times. I am hopeful the Bamar translation will also be published.

The text is below:

In 2010, I worked on a section of an ITU report about information and communication technologies in the least developed countries (ITU, 2011). Analyzing the countries that were at the bottom of the league tables in telecom, I found to my unhappiness that Burma was one before the last in mobile telephony. Hearing that N Korea was reaching 1 million active connections by end 2011, I checked the data again. Now Myanmar is last, other than for St Helena, a UK colony with a population of 5,000, which does not seem to have any mobiles. 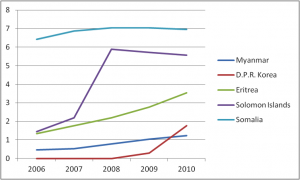 It is not that N Korea has more mobiles than Myanmar, but that as a proportion of the population it is performing better, as a result of the rapid increase in connections driven by a foreign-owned private operator issued a license in 2008. Myanmar has had mobiles for longer, but according to data reported to the International Telecom Union by the government, the government-owned operator’s progress has been slow, compared to other low-performing countries that have not reformed their sectors.

Table 1: Total mobile connections and growth rates among the countries with lowest penetration

There is no doubt that some of the data may not be accurate (whenever one sees numbers nicely rounded to thousands, one questions their veracity). It is the duty of the relevant country authorities to report the most current and accurate data to the ITU. In the case of Myanmar the 2009 number has been supplied by the Ministry of Posts and Telecom, while the 2010 number is an ITU estimate, which explains the round figure for 2010 and not for previous years. It would not be fair to use data from the Ministry only for Myanmar, but even if one tries, there are problems. The Ministry reports data by project not by aggregate connections; and the problems of rounded numbers persists.

But let us assume that there may be more mobiles in Myanmar than the ITU reports. Even then, it can, at most, overtake N. Korea and regain its old place at second (or third, counting St Helena) from the bottom. Is this something worth debating? The real challenge is to vault out of the Bottom Ten altogether, and give the people of Myanmar electronic connectivity on par with neighboring countries.

To achieve this goal, Myanmar has an advantage.

Starting late means that most of the mistakes have been made, by others. In the world of policy design, we spend the most effort working around previous mistakes. For example, Thailand’s recent effort to develop its ICT sector has been bedeviled by the existence of concession contracts from a previous time. A green field is much easier to work with.

So, if the government wants to take Myanmar out of the Bottom Ten, what should it do? This is not the place for detail, but here are five key actions that must be taken at the outset:
• Build a national open-access fiber backbone as a Public Private Partnership
• Conduct an assessment of spectrum use and availability, especially for 3G and 4G technologies
• Initiate action to refarm or reassign frequencies if valuable frequencies have been assigned to low-value uses (it is most likely that the military are using frequencies across the spectrum)
• Design a technology-neutral access network license system
• Design and implement a clear market entry/exit policy modeled on Pakistan’s 2003 policies
In all these cases, the government should insist on solutions that are appropriate for developing country contexts and avoid the wholesale importation of policies developed and implemented in advanced market economies (Samarajiva & Zainudeen, 2008). International consultants will be required, but they should be carefully managed and coordinated so that the overall scheme is coherent and suits the local circumstances.

Managing the policy actions will require the establishment of a policy cell within a strong Ministry, preferably Finance and Planning. Most, if not all, of the present employees of Ministry of Posts and Telecom (14,770) should be moved into the national backhaul network PPP.

A sector specific regulatory authority will be needed. The first policy actions can be taken in parallel with the design and planning of the regulatory body.

Getting the architecture right

One way to get the basic elements of the architecture right is to learn from the experience of China’s engagement with the World Bank as it emerged from decades of closed-economy policies (Bottelier, 2006). Engaging with an entity such as the World Bank, rather than a specific country or company, opens up access to a range of lessons on telecom reforms: many successes, but some failures as well. The lessons are more important than the money.

I will illustrate with one failure and one success.

Since the late 1990s, the World Bank and its associated experts (e.g., Wellenius, 2000) promoted universal service funds as effective tools to bring the benefits of connectivity to the poor. At the time, this was an attractive solution and one that was superior to the previous practice of imposing universal service obligations on telecom operators. While significant benefits were gained, the instrument did not perform as well as expected, with more than USD 8 billion lying unspent in universal service accounts worldwide (Somasekhar, 2010).

The World Bank Independent Evaluation Group (2011, para 4.28), upon reviewing experience in multiple countries over five years, conceded that it failed to live up to the original promise:
Equity and integration of marginalized groups have been more effectively supported by Bank support for ICT policy and sector reform than by operations specifically designed to achieve these goals. ICT operations that supported reforms to introduce competition into the sector, when successful in supporting those reforms, have had significant impact, especially in access to cellular telephony services. This increase in overall access has had a spill-over effect of providing access to the underserved. Lower tariffs (especially in cellular telephony), falling handset prices, and the expansion of prepaid cellular services are all channels that facilitate access by the poor. One indicator of the poor becoming part of the customer base of cellular telephony providers is the monthly average revenue per user (ARPU), which declined from about $20 in 2002 to about $5 in 2010 in developing countries.
The success was in reforms to introduce competition to the telecom sector, as referred to above. Not only did these reforms bring the benefits of electronic connectivity to the poor, they paid back the costs of reforms many fold.

I was personally involved in managing aspects of telecom reforms for the government of Sri Lanka, funded by credits from the World Bank (Samarajiva, 2000, 2001; Samarajiva & Zainudeen, 2008). The total expenditures could not have exceeded USD 15-20 million. In 2010 alone, the government of Sri Lanka took in USD 122 million as revenues from the partially privatized telecom industry (Rajapaksa, 2011). Today, Sri Lanka is at the forefront of ICT developments in South Asia (behind only the Maldives in mobile connectivity), with almost universal access to voice telephony at some of the lowest prices in the world, and making good progress on broadband connectivity as well.