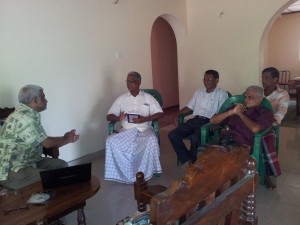 Badalkumbura is located in the Moneragala District, one of the most impoverished in Sri Lanka. But it is located in the midst of a smallholder boom in rubber. Here, the key advantage is the weather. In contrast to the traditional rubber districts where rain prevents tapping of the trees for latex sometimes for half the month, rainy days are an exception in Moneragala. Thus new rubber is expanding rapidly, all with smallholders. The only downside is distance from the factories that produce value-added products such as gloves, the main auction, and the port.

Last year, as part of the KBE research, we sat with small groups of smallholders in multiple locations, including Badalkumbura, to learn about their problems. While we could not go back to all the study locations, we did make it a point to return to Badalkumbura and share our findings with community leaders, including the video made of a smallholder cooperative in another part of the country.

An interesting discussion ensued on the failure of the bottom-up or government-encouraged model of organizing smallholders into Thurusaviya farmer organizations compared to the success of the buyer-organized initiatives such as DPL’s FirstLight. Other topics included the value of smartphone apps specific to rubber and the intelligibility of the payment advices that accompanied the biweekly payments.