Others joining Skype to scavenge the carriers 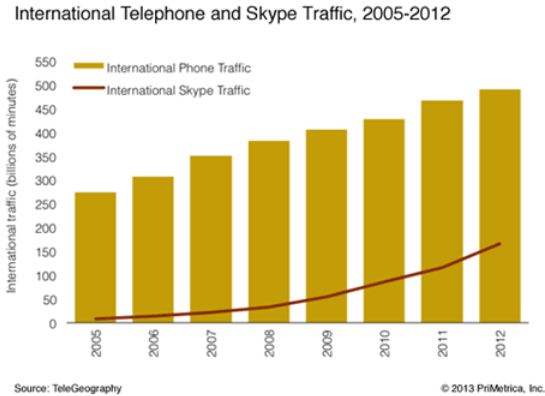 “Only five years after its launch, Skype has emerged as the largest provider of cross-border voice communications in the world,” said TeleGeography in 2009. Today Skype is barely a 10-year old. Yet, its year-on-year increase of 51 billion minutes in 2012 is more than twice the collective increase achieved by all international carriers worldwide.

International migration, the rapid uptake of mobile phones in developing countries, and steady reductions in international call prices—especially in the form of flat-rate (and even free) calling plans—have contributed to traffic increases. Nevertheless, recent growth rates are well below the 13% average that carriers could count on to offset price declines over much of the past 20 years.

TeleGeography has further warned about the “stunning pace” of increasing OTT voice and messaging applications.

The pressure on carriers will continue to mount in the coming years. While Skype is the best-known voice application, a host of alternatives, including Google (Talk and Voice), WeChat (Weixin), Viber, Nimbuzz, Line, and KakaoTalk have gained popularity. Perhaps most ominously for telcos, Facebook recently added a free voice calling feature to its Messenger application.