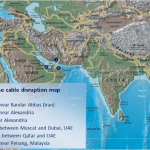 Earlier we discussed the snapping of four submarine cables in Egypt and its impact. Now we have come to know it was an act of sabotage. Telecom Egypt’s CEO Mohamed al-Nawawi has confirmed that his country’s Armed Forces have arrested three saboteurs. Among the global news outlets, Associated Press and BBC have covered it by far. There is, however, nothing to celebrate. Because, it has happened before with biblical proportion.

Between January 23, 2008 to February 4, 2008 – six submarine cables were snapped in a row in 12 days across the Mediterranean Sea, Red Sea and the Strait of Malacca (Click to enlarge the thumbnail above). Nobody knew the cause of such unprecedented sequential failure of transoceanic telecoms backbone.

ITU’s the then Director Sami Al Basheer Al Morshid was cautiously explicit to AFP, “We do not want to preempt the results of ongoing investigations, but we do not rule out that a deliberate act of sabotage caused the damage to the undersea cables over two weeks ago.” Four months later Earl Zmijewski of Renesys Corporation had warned, “Physical failures (of submarine cables) can also be the result of malicious activity, e.g., 9/11” (Page 7)”

We, in LIRNEasia, are engaged in evidence-based research. Submarine cables are historically vulnerable to natural calamities like earthquakes and cyclones. Anchors and fishing nets have been also blamed for accidentally damaging the undersea cable networks. Sabotaging the submarine cables is, however, a deliberate crime. Our research is devoted to safeguard the submarine telecoms networks by coupling a terrestrial intercontinental link.