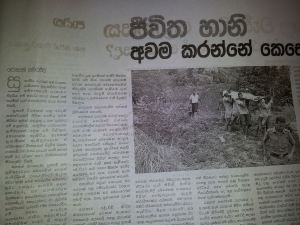 Despite the massive goof-up with the situation reports which over-reported the number of casualties from the Koslanda landslide by a factor of eight (300 as against the actual 38), the country has been shaken by the disaster. The Sinhala language weekly, Ravaya, was dominated by it. The article that I contributed, building on the thinking we had done after the tsunami, and what our colleague science journalist Nalaka Gunawardene had contributed stood out in terms of constructive proposals that would help avoid such calamities in the future.

The relevant sections in English are given below:

The foundation is the development of good hazard assessments. Consultants working for the Disaster Management Center have developed these for the coastal areas though they are not public. I had for long believed that the East Coast was the most vulnerable to tidal surges and tsunamis. These studies show that the coastal areas north of Mannar, including the city of Jaffna, are at even greater risk. These studies must be completed for the entire country, kept updated, and made easily accessible to the public.

The practical action we can take now is to ensure that public buildings such as schools or hospitals in the areas with significant risk are built or retrofitted to appropriate standards or relocated. Private buildings, such as houses, have to be dealt with differently since the owners may not be in a position to bear the additional costs.

In an ideal world, all buildings, including private houses, will be insured. If hazard assessments are publicly available, one would expect the insurance premia in high-risk locations will be very high or that insurance will not be provided. If a house cannot be built without insurance or insurance will not be provided unless safety standards are met, this will result in a decentralized procedure that will regulate building in hazardous locations.

That is the ideal world we do not live in. Due to reasons I do not fully understand, but possibly including the government monopoly on insurance for several decades, insurance participation in Sri Lanka has been lower even than in India. Hopefully this is increasing since the industry was de-monopolized and began to engage in extensive marketing.

Even if an insurance-based solution is not immediately implementable, it is possible to come up with a glide path that will move us in that direction.

The rest in English at LBO.LK.