In a world where everyone is reaching for better, faster and more feature packed mobile phones, a little known Australian company has designed and manufactured a mobile phone focusing on the bare minimum, with the elderly in mind, particularly those with mental and physical limitations.

The KISA phone (KISA stands for Keeping It Simple Always), designed in consultation with community organizations such as Vision Australia and Guide Dogs Victoria, first marketed the product in August last year and is aimed at those who struggle with technology. It has been received as an excellent mobile communications solution for people with impaired vision, hearing or dexterity.

This is a compact phone, light enough to be worn around the neck with a lanyard strap and can be pre-programmed with up to 10 numbers. It can receive calls from any number, just like a regular phone although it can dial out only the numbers that were preset. Of course these numbers can be changed, if required. It has very little in the way of bells and whistles. But what it does have are large buttons which display the pre-programmed numbers, with large lettering (or photos of your contacts if you would prefer), so that you can identify your contacts even with very weak eyesight and you don’t even need to be able to read. The large buttons mean that those with arthritis can easily make a call to one of his/her emergency contacts, instead of having to maneuver fiddly little buttons or a sensitive touchscreen. Given the option of customizing the unit to feature high contrast colour combinations, it helps those with dyslexia to read easier. 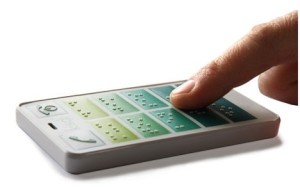 It can even be customized to being a braille phone, where the buttons are raised according to the braille alphabet. The back of the phone can be customized to carry critical medical information and address details, making it an invaluable tool for those suffering from Alzheimer’s and other forms of dementia.

One very positive testimonial about this phone reads as follows;

“My hat off to KISA team for bringing out a product with such crisp and clear ties to its niche user needs. What a fresh change from a “see what we can do!” philosophy in product development to “what would you like us to do?” You have taken the time to ask your potential users what they want – and you have listened. The result is not only a product that is unique and desirable but also an impressive head-start in customer relations.”