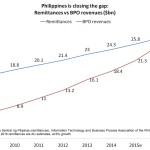 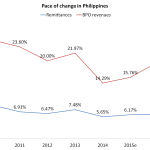 Manila retains its second position among the top-ten BPO destinations worldwide. It remains ahead of Mumbai, Delhi, Chennai, Hyderabad and Pune but ranks behind Bangalore, according to consultancy Tholons. The rapidly growing BPO industry now represents 6% of Philippines’ GDP and rivals remittances from migrant workers as the country’s largest revenue generator. BPO sector employs more than 1m people and the industry’s revenues, which currently stand at $18bn, could reach $25.5bn in 2016.

A raft of multinationals, including JPMorgan Chase, HSBC and Royal Dutch Shell, have set up BPO operations in the country, employing tens of thousands of people. One advantage that the Philippines enjoys over other BPO outsourcing centres is cheaper office rents. Prime office space in Manila can be rented for just over two-thirds of the cost of space in Mumbai, while it is also cheaper than Delhi, Bangkok, Guangzhou, Taipei and Seoul, according to global property agency Colliers.

But the country’s chief selling point is a large young and educated population that speaks English with a neutral accent and has a cultural affinity with the west. It is just what North American customers on the other end of the phone want. The drawback of global time zones — which require many Filipino phone operators to work antisocial hours — is compensated for by comparatively high wages. Average salaries in the BPO industry are about 60 per cent higher than the national average.