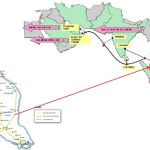 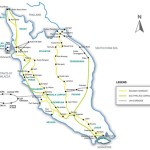 Three years back I wrote about the Bay of Bengal Gateway (BBG) cable. It has been officially activated today. In my engagement with the Asia Pacific Information Superhighway of ESCAP, I have been consistently referring to BBG as Asia’s very first cross-sector telecoms infrastructure that links beyond the border.

The designers of BBG have very wisely bypassed the pirate infested infamous strait of Malacca. From double landing stations at Singapore it traverses across Malaysia and terminates at Penang. During this overland journey the cable follows highway, railway and gas pipeline routes as its right of way (Click on the thumbnails above). Such diverse transport layers have injected enormous resilience to the Singapore-Malaysia terrestrial segment of BBG network. Therefore, we can confidently crown it as Asia’s first hybrid submarine cable. All the best BBG!