From Turkey, an idea for disaster response 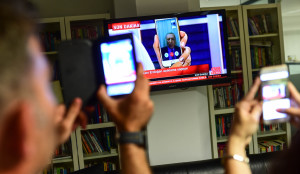 It was happenstance that New York Times commentator and US Academic of Turkish origin Zeynep Tufekci was in Turkey when the coup unfolded. Her reflections on the role played by the Internet and social media in defeating the coup are of great interest. But what caught my eye was a simple action mobile operators can take in the immediate aftermath of a disaster, natural or otherwise:

When I was stuck at the airport in this city in southern Turkey, on Friday night, I had many things to worry about. A coup attempt had just begun and the country was in turmoil. My plane to Istanbul had almost flown into the worst of the fighting, but luckily we were prevented from taking off at the last minute when the airspace was closed.

One thing I did not have to worry about, though, was running out of data on my phone. In the early morning hours, Turkey’s leading cellphone provider topped up the internet allowance of every subscriber. This was more than unusual. Turkey has experienced many crises recently, including deadly terrorist attacks, and they usually lead to a closing of information flows, not the government-aligned service provider’s making it easier to transmit information.