Budget 2017 does not bode well for Sri Lanka ICT sector 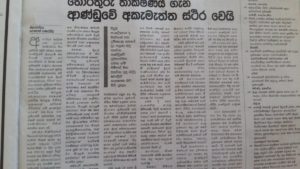 “The digital economy will empower our nation – through providing affordable and secure Internet connectivity to every citizen in any part of Sri Lanka, removing barriers for cross-border international trade.”

The above quotation from the Prime Minister’s Economic Policy Statement in Parliament on 27 October 2016 suggests the government sees ICTs playing a vital role in the country’s progress. Sri Lanka has been a leader in ICTs in the region. The Prime Minister gave enthusiastic leadership to the e Sri Lanka initiative, which when launched was a pioneering effort. It is known that he played a valuable role in connecting Sri Lanka to the Internet in the 1990s.

Yet, the practical implementation of policy ideas is what matters. The 2017 Budget proposal are ominous. The Finance Minister is taking over the functions of the regulator, along with its fund. Taxes on data use which were lower than the taxes on voice have been raised to erase the difference. The SIM tax which we objected to in Bangladesh has been imported to Sri Lanka.

My analysis was published in the Daily FT and Ravaya in Sinhala (text in FB notes).