Continuing the conversation on cost of compliance 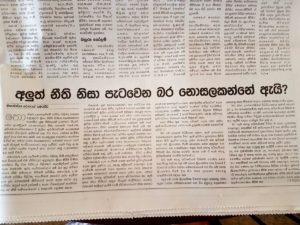 After two decades of sporadic efforts, Sri Lanka’s Parliament unanimously passed the Right to Information Act in June 2016. LIRNEasia responded to a call for comments on the draft Bill and offered comments on various versions of the Bill through the media as the law was being shaped, many of which were accepted. Overall, it was a successful research-to-policy intervention. But in one area, we failed. That was in convincing the drafting committee to address costs of compliance to small organizations.

More or less the same people who drafted the RTI Law are making proposals regarding fundamental rights in the new Constitution again without regard for costs of compliance. The conversation continues (in Sinhala, in Ravaya above) and in English in the Financial Times:

Compliance with the Right to Information (RTI) Act causes costs.Defending one’s organisation in a fundamental-rights application before the Court of Appeals causes costs.But the experts who drafted the RTI Law paid no heed to costs of compliance and denied requests for small changes that would have allowed the Right to Information Commission to make rules to reduce burdens of compliance for small organisations.The legislators approved what the experts proposed.