Is the mobile phone to blame for murder?

A man buys himself a Rs 40 knife, and uses it to kill his wife. He later tells the police that she used her mobile phone too much – he suspected she was being unfaithful. He intended only to cut her ear off. But in a rage he killed her.

A “reporter” calls LIRNEasia Chairman, Rohan Samarajiva, to ask him what constitutes “appropriate” use of mobile phones. The story was published in the Sunday Edition of the Lakbima newspaper (page21).

Are we to infer that the murderer’s reasoning is in some way logical?

What the appropriate or inappropriate use of mobile phones has to do with a man in Alawathugoda murdering his wife on the suspicion that she is involved in an extra-marital affair, is not quite clear. What is clear, though, is the incompetency of the supposed “journalist”.

She was quite likely looking for context, an opportunity to recycle Monday’s sensational news in the Sunday paper. But there is no context to a straight-faced murder; no broader analysis available. A jealous husband killed his wife, and he used a knife to do it. It has happened over and over again.

Factual corrections to some of the claims in the article

The only way in which there is broader and relevant context to this story is if the patriarchal viewpoint that the woman was somehow at fault can be asserted. Hence, the call to the most public proponent of ICTs in Sri Lanka to imply that maybe the victim’s use of her mobile phone is questionable. Then an interview with a social scientist too, who talks about “addiction” to mobile phone use. So-called news analysis is published.

The “expert” says that people use mobile phones are to “share” loneliness. The “journalist” then wrongly infers that this means mobiles phones “break down” families and interpersonal relationships. If at all, our bottom-of-pyramid (BOP) work from 2011 shows that one of the main perceived benefits of phone access in Sri Lanka is maintaining relationships with friends and family: 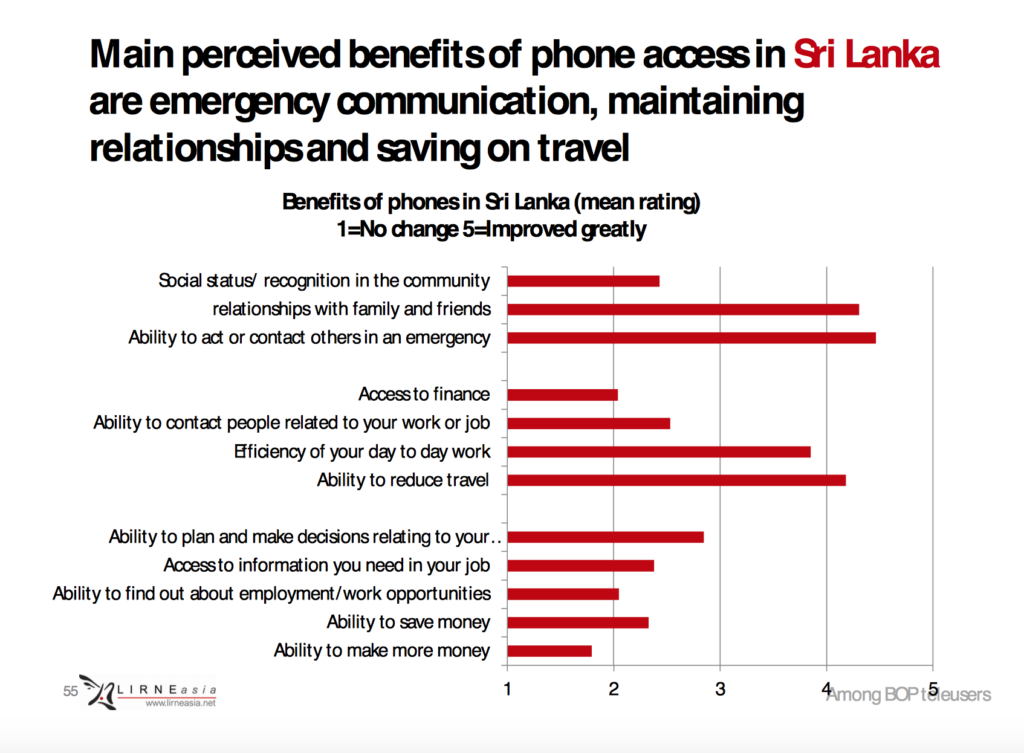 The social scientist is also quoted as saying that mobile phones are used as a status symbol. The same dataset from 2011 again shows that recognition is one of the less important benefits of owning a mobile phone. This is especially true for Sri Lankan BOP users: 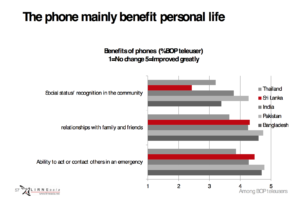 Whatever the cause, murder is murder. There is no point in trying to blame the mobile phone.