LIRNEasia carried out qualitative research on user perspectives of Internet use in India among respondents from low and middle income households. It is a part of a series of research looking at the use of free and subsidised data in the developing world. The research was carried out with financial support from Mozilla, the UK Government’s Department for International Development, and the International Development Research Centre, Canada.

India was an interesting case in the zero rating debate. The Telecom Regulatory Authority of India (TRAI) passed the Prohibition of Discriminatory Tariffs for Data Service Regulations in 2016. This was aimed at preventing operators from acting as gatekeepers to content accessed on the Internet, on the basis that it violated the principles of net neutrality.  This research, carried out after the ban, looked at barriers to Internet use, factors that drove people online, content accessed by users, and cost optimization strategies.

The report honed in on the use of earned reward applications. These applications can be mapped to a model suggested by TRAI as an alternative to zero-rating, in order to provide free data to connect the unconnected. Of the respondents who had used the apps and earned rewards, many discontinued use due to dwindling offers. Hence, concerns of the earned reward apps nudging users to use specific content, thereby creating a “tunneling effect”, seem premature.

User perspectives of Reliance Jio, which offered free 4G data during the period of fieldwork, served as a counterfactual to zero-rated offers, where specific content was subsidized. While Jio enhanced the user experiences of those already online, non users spoke of the sequential nature of the problem of affordability, whereby the problem of cost of data becomes relevant only once an individual is able to purchase a device. 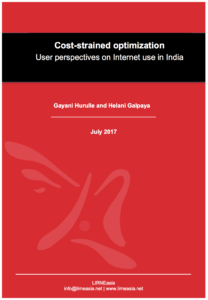