Electoral reforms were a key part of the constitutional changes promised by major Parties contesting both the Presidential election in January 2015 and the general election in August 2015.  The basic promise was to do away with intra-party competition for votes inherent in the present PR system and make MPs more accountable.

As a first step, a Constitutional Assembly was set up to debate the issue. This assembly recommended a mixed-member method and increasing the number of MPs in the Parliament to 240. The seats in the Parliament will be allocated to political Parties proportionate to the votes received by each Party. The preferential voting system to return MPs will be abolished.

In addition, the 22 electoral districts of Sri Lanka are to be re-demarcated. These will become smaller constituencies to return 140 MPs on a first-past-the-post basis. The remaining 100 MPs will be returned from Party Lists. This change affects different political Parties in different ways. Small Parties, those representing dispersed ethnic minorities, in particular, are wary. In larger electoral districts their candidates can collect votes across a district.

Smaller Constituencies are seen as disadvantageous to the small Parties. But smaller constituencies electing one member per constituency are seen as key to doing away with intra-party competition and making MPs more accountable. Agreement on size and form of electoral districts is key to enacting effective electoral reforms. But redistricting or demarcation is viewed as an opaque process that is possible only through a delimitation Commission established for the purpose. 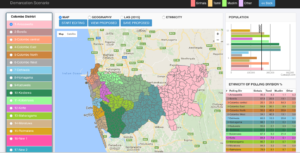 The left panel on the tool lists the electorates reflected in the map (center). On the right are a population graph (top) and ethnicity data (bottom). The map shows grama niladhari divisions which can be added or removed from the selected electorates. Data on the panels (right) reflected the changes made to the map.

The demarcations tool is the brainchild of LIRNEasia lead researcher Dr. Sujata Gamage, PhD MPA, who specializes in data analytics for public policy. With this tool users can add or delete Grama Niladhari Divisions to or from proposed electorates. This creates a new distribution of electorates in the given district along with indicators of the resulting new population size and ethnic distribution in each new electorate.

The project was funded by the International Development Research Centre of Canada.

Since July 2016, Dr. Gamage has worked with the Forum of Minor Parties in Parliament to make informed interventions regarding proposed electoral reforms. Dr. Gamage’s work focused on ‘what-if’ simulations of reforms, based on data from past elections. Her findings were published in popular media as well as academic journals. 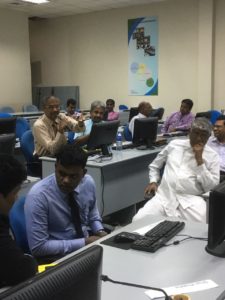 K.Thavalingam, Chairman of the Delimitation Commission, providing feedback on the tool 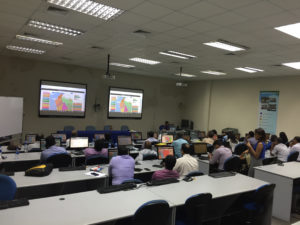 Participants at the launch of www.opendemarcations.lk on 14 September, 2017 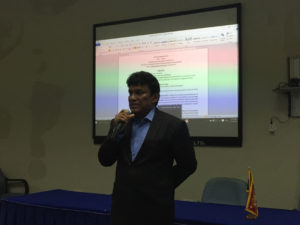 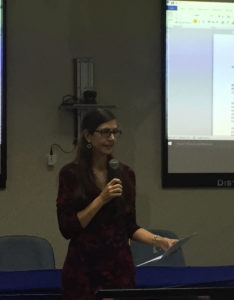 The responses of the legislators before and after the launch show that when stakeholders involve themselves knowledgeably, they become more trustful and conciliatory. A more systematic monitoring and evaluation is needed for more robust findings.

Democratic processes in developing countries are often hampered by ethnic issues. An open and transparent process in electoral reforms can turn Sri Lanka into a beacon of good practice for the rest of Asia. LIRNEasia is catalyzing this movement by disseminating the tool for public use.