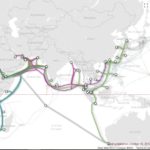 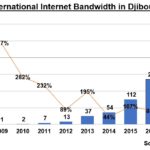 With less than a million citizens, Djibouti struggles with the abysmal ICT indicators. Its internet hums with 12% penetration while mobile SIM penetration is 36% only.

Nine submarine cables transit at Djibouti to link Africa, the Middle East and Asia with Europe.
Australia is coming soon! That’s why Djibouti has the world’s highest compound annual growth rate (136%) of international bandwidth during 2008 and 2017, according to TeleGeography data.

Djibouti is increasingly becoming the East African hub of international connectivity. Recently it has stunned the industry with AWE or Australia West Express cable. Location has made Djibouti the global power’s preferred destination of offshore naval base in Africa. Battleships and submarine cables keep sharing the deep water of this Red Sea port. And China is no stranger in this party.

Recently a group of investors have announced the PEACE submarine cable project. It will span approximately 6,800 km to connect Pakistan and Kenya via Djibouti. Presumably the acronym, PEACE, refers to Pakistan-East Africa-China-Europe.

The project’s backers assert the PEACE submarine network will offer the shortest submarine fiber cable route from China to Africa, with links to Europe via land fiber cable transit. China Construction Bank will provide the project financing. With the MOU in place, work on the project will begin next month with a goal of having the undersea network ready for service by the third quarter of 2019.

How a Pakistan-Djibouti submarine cable will connect Africa with Europe? Another report answers:

With this innovative solution, the PEACE cable will enable the shortest cable route from China to Africa and Europe via land cable transit.

Being a member of SEA-ME-WE 5, Djibouti Telecom has access to the carrier-neutral PoPs at Palermo and Marseilles. Both the PoPs are linked with a very robust terrestrial pan-European networks. Meanwhile, the China-bound traffic could be pumped to Pakistan followed by further pushing northward along the China Pakistan Economic Corridor (CPEC). It could be done through proposed PEACE and existing AAE-1 submarine cables.

Conclusion: Blending submarine and terrestrial networks dramatically expands cross-border connectivity through the routes that remained invisible until their activation. Kudos to the beautiful minds of submarine and terrestrial transmission industry! Djibouti should reform its telecoms market to inject competition and capital. Otherwise its citizens will helplessly keep watching the transshipment of Internet, not availing any bit of it.