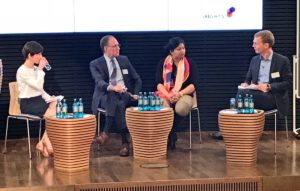 Helani Galpaya, our CEO was invited to speak at this year’s German Forum Media and Development (FOME) held in Berlin, German, 16-17 November 2017.
FOME is a network of institutions and individuals involved in the field of media development, many of whom are working on creating a pluralistic media environment, not just in Germany but across the global south. Each year the FOME symposium focuses on a specific topic. This year it was Internet Governance.  The event was organised by iRights and Conrad Anedauer Stiftung.
Helani and Mark Nelson of CIMA were in the first panel titled “Alphabet Soup”.  The idea of the panel was to introduce concepts of Internet Governance to the audience, and to explain the connection between Internet Governance and media development. Subsequent panels during the two-day symposium expanded on the topics introduced, with participation of panelists from Europe, America, Africa and Asia.
The full symposum program is available here.