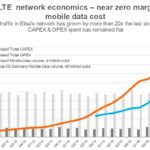 Finland is often cited as a miracle of education. Its telecommunication regulation is equally impressive. In 2011, the Finnish consulting Rewheel has predicted that the country’s mobile operators would grow data traffic without increasing investments. It has been proven right, as shown in the chart. Data traffic in Elisa’s Finnish 4G/LTE network has grown by more than 20-times between 2011 and 2017. It has exceeded pumping 20 GB of data per unique user per month during 2Q of 2017. Yet the operator’s capital and operational expenses remained flat.

One may wonder about the secrets of Elisa’s success. The answer, in brief, is sensible regulation blended with commonsense. And I wrote about only one simple Finnish approach way back in 2009. Now Rewheel has comprehensively debunked the popular doctrine of declining capacity and rising costs in mobile networks.

The fact that mobile network CAPEX does not increase – but rather decreases in some cases – while mobile data traffic nearly doubles every year suggests a zero or nearly zero marginal mobile data cost structure (i.e. near zero costs are triggered purely by expanding network capacity in order to accommodate the increased mobile data traffic).

In our consulting engagements we have calculated the actual cost of data traffic driven 4G capacity expansions in real networks. The annual cost of expanding a 4G network’s aggregate capacity by a Gbit/s is as low as few hundred thousand EUR which is roughly the equivalent of €0.1 per GB; a near zero marginal mobile data cost if one considers that consumers are paying few hundred EUR per year for their smartphone or mobile broadband plans.

Moreover, when operators upgrade their network peak speeds (e.g. Gigabit LTE) as a by-product they are increasing the network capacity. If total mobile network CAPEX remains flat despite the LTE-Advanced peak speed upgrades while data traffic continues to grow during the period this too will yield an effective zero marginal mobile data cost.

Our calculations show that the doomsayers will again be proven wrong. Mobile network CAPEX will stay flat the next five years with the help of 3.4-3.8 GHz spectrum and Massive MIMO even if data traffic grows another 10-fold (from 20 GB in 2016 to 200 GB per unique user per month in 2021) as forecasted12 by Finnish operators.

GSMA should analyze Elisa’s Finnish case before bombarding the regulators from its annual fest at Barcelona. Here is the report of Rewheel.