Let the Deaf be Heard: Accessible and Inclusive ICTs for Persons with Disabilities

Rajat Acharya grew up in rural Dhading District, 200 miles West of Kathmandu. He had a neighbor, Ram Adhikhari, who was deaf and communicated using sign language. Adhikhari had no formal education beyond the primary grades and taught himself by reading discarded text books. Acharya, a naturally shy child, was afraid of Adhikhari, and but his father developed a friendship with the deaf man and learnt sign language. Acharya’s family moved from the neighborhood when Rajat was eleven years old, and they lost touch with their deaf neighbor. Ten years later, Acharya, now an IT student, was brainstorming ICT solutions for persons with disability and remembered their neighbor from when he was a child. He looked Ram Adhikhari up on Facebook, to find that he was the Principal of Swabalambi Primary School for Deaf Children.

“I was determined to create something that could help deaf people and the students from this school,” he said. 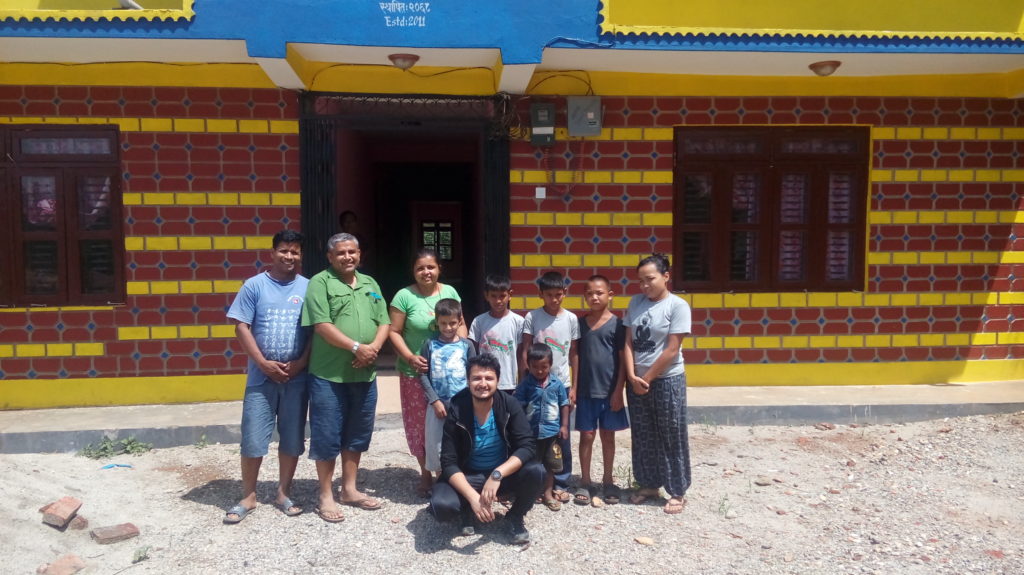 Hacker Rajat Acharya at Swabalambi Primary School for the deaf with the Principal (and his childhood neighbor), Ram Adhikari and students

LIRNEasia, a regional ICT policy think-tank based in Colombo, together with the Internet Society Nepal, the Centre for Law and Technology and Woman Group for Disability Rights (WGDR) hosted a hackathon on April 28thand 29thto develop “Accessible and Inclusive ICTs for Persons with Disabilities”. Students from the ten of the best IT programs in Nepal participated in the two-day program, to produce impactful mobile apps, win cash prizes and begin collaborations with the Nepal Telecommunication Authority.

“At LIRNEasia, we focus on making life and economic activity easier for people in the Asia-Pacific,” said Prof. Rohan Samarajiva, Chair of LIRNEasia, explaining the rationale behind the activities. “A few years ago, our work focused on helping people get online. Now that the Internet is becoming ubiquitous, we’re looking at how to identify and connect those who might have been left behind, and at how ICTs can be used to improve the quality of life.”

LIRNEasia is currently engaged in a Ford Foundation funded project that seeks to understand how ICTs can support independent living for persons with disability. The idea behind the hackathon was to develop mobile apps that could be used by persons with disability, to make them more independent. LIRNEasia started with a Workshop on Accessible and Inclusive ICT for Persons with Disabilities which brought together39 participants representing 29 disabled persons’ organizations (DPOs) in Nepal, a month earlier, in March. Over two days, participants discussed the issues they face and to identified how ICTs could help deal with these. Among those guiding the discussion, in addition to the Nepali organizers, were Prof. Rohan Samarajiva, Dr Nirmita Narasimhan, Senior Fellow and Policy Director at the Global Initiative for Inclusive ICTs and Htaike Htaike Aung, Director of Myanmar ICT for Development Organization (MIDO). The three facilitators have jointly engaged in similar work before in Myanmar. Also joining them in Nepal was Dinesh Kaushal, leader of non-visual desktop access development in India for Publicis.Sapient, himself visually disabled.

Hackathon on Accessible and Inclusive ICTs for Persons with Disabilities

This preliminary event highlighted the importance of a communications solution for deaf people in Nepal, as deaf and illiterate people are unable to communicate with government officials and other important bodies without a sign-language interpreter.

“The rate of illiteracy is likely to be higher among the deaf community than among those living without disability, because there are very few schools for the deaf,” said Laleema Senanayake, a disability researcher from LIRNEasia. “We don’t have a good source for accurate numbers, so the next phase of our project will focus on acquiring nationally-representative data to help us understand the actual scope of the problem.”

On the two days following the capacity building course, the organizers of the pre-hackathon event presented these key issues to a group of app developers who would try and find solutions. They came in groups of four: forty coders, designers and generally brilliant folk – Rajat Acharya among them – nominated to represent ten of the best-known computer science programs in Nepal. But they weren’t going to code yet. This was a pre-event, an orientation of sorts to an extended long-play version of your everyday hackathon.

“This was the first hackathon in Nepal that focused on people living with disability as the main user,” said Babu Ram Aryal, Chairman at one of the partner organizations, Center for Law and Technology (CLT), Nepal. “So, we thought it was important for the teams to get a really good understanding of the potential users and the problems we would be trying to solve.”

Following the presentation of previously-identified issues, the teams were walked through design thinking methodology by Kaushal. 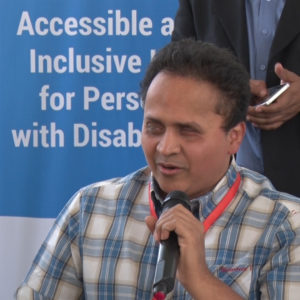 Dinesh Kaushal, leader of non-visual desktop access development in India for Publicis.Sapient. Kaushal, himself visually disabled, shares the basics of design thinking with participants at LIRNEasia’s hackathon for Accessible and Inclusive ICTs in Kathmandu, Nepal. (March, 2018)

“Anyone can come up with far-fetched ideas for solutions. This is part of the process of a hackathon, to have seemingly crazy ideas,” Kaushal explained. “But most of the time we lack the tools of structured thinking that help us turn these crazy ideas into practical, user-friendly solutions.”

Kaushal himself was rendered completely blind due to glaucoma at the age of eight. With sheer determination he solved his own problem by developing Screen Access for All, the first open source screen-reader in the world.

Following the presentation by Kaushal, the students proceeded to brainstorm and pitch ideas. Ten proposals were made, and each team assigned to one of four mentors selected from leaders in Nepal’s tech industry, to develop their pitch over the coming month. Only five of ten teams returned to the actual hackathon. Three walked away with cash prizes of NPR50,000, NPR30,000 and NPR20,000. Apart from the cash prizes, the Winning and Runners Up teams were given the opportunity to work with the Nepal Telecommunications Authority to develop their products further.

Acharya’s team from New Summit College, came Runners Up with their product, the BahasaBuddyapp.

In the month allocated for app development, the team from New Summit made the four-and-a-half-hour drive to Acharya’s home, Murali Banjyang in Dhading District where the Swabalambi school is located. They worked with Ram Adhikhari and the students of the school to come up with Bahasa Buddy, an app which supports those with hearing disability, in the process of learning to read and write Nepali. 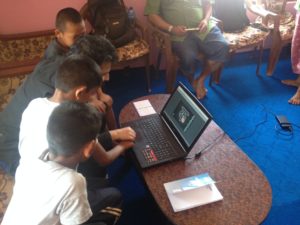 “The app was created with the deaf community in mind, but it also has the potential to impact the lives of all illiterate people in Nepal,” pointed out LIRNEasia’s researcher, Senanayake.

The app uses gamification to aid learning. It presents the Nepali alphabet, one by one, allowing the user to trace over the letters, learning to write. When the user learns to write the letter, she is rewarded with applause. The app also features images of objects associated with that letter and provides sign language translation, allowing the user to take the first steps to literacy, on her own.

Adjudicators at the hackathon were looking for five key attributes of the product: impact, feasibility, reach, maturity and affordability. The clear winner, on all these counts, was the Mero Sati app developed by students from Prime College.

The idea behind the app was to address the fundamental problem identified at the DPO’s workshop the month before: the inability of illiterate deaf persons to communicate with government officials without an interpreter. The app opens to a series of possible environments the user might be in. These include home, school and social gathering among others. Once the user selects the correct location, the app then presents a number of “play cards” which indicate subjects, objects and activities via images which can be selected and arranged to form the idea the user wants to communicate. When the play cards have been lined up, and automated voice “says” what the user wishes to communicate.

“The most useful thing [about the Mero Sati app] is that it could be used immediately,” said Manohar Bhattarai, a leading ICT and information economy expert from Nepal who was one of the three adjudicators to assess the apps. “The other thing is that the app is simple.”

The potential impact of the app was demonstrated at the event itself. The hackathon was held at the Institute of Engineering, Tribhuvan University, with food provided by The Bakery Café. The food chain trains and employs 45 hearing and speech disabled staff in ten locations, in a country where deaf people are otherwise considered unemployable. The Mero Sati app was built for deaf people, so the team decided to trial the app with the deaf Bakery Café representatives at the venue during the hackathon. At the end of the trial, the representative handed the mobile phone back to the team and asked if he could download the app on his phone right away.

Rajat Acharya and his colleague Suchi Shresta will showcase their products at the Inclusion Pavilion at Disrupt Asia 2018 where LIRNEasia will be share its research.