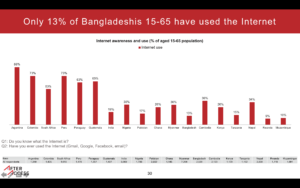 This graph shows that out of 18 countries surveyed by AfterAccess so far, Bangladesh has one of the lowest percentages of Internet users (13%) across the population. This number is higher only than much poorer countries Rwanda and Mozambique

These findings were released in the report “AfterAccess: ICT access and use in Asia and the Global South” in Dhaka, today.

The presentation of the results by CEO Helani Galpaya was followed by a stimulating panel discussion between: 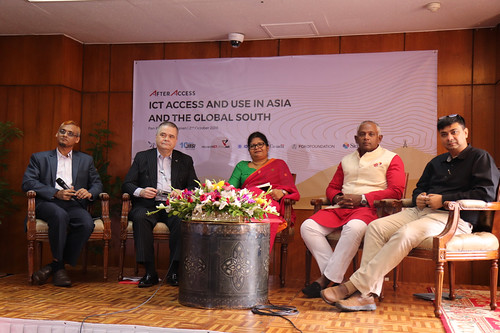 Journalists in the audience were surprised by the low Internet penetration numbers – after all the regulator reported around 80 million “subscribers”, which would be significantly higher penetration than the 13% we reported.  But as we pointed out, we count individuals (not all SIM cards that are data enabled), we count people between the ages of 15-65 (so we will not count those over the age of 66 who are using the Internet), we don’t count corporate users, we don’t count SIM cards inside devices (e.g.: POS terminals, smart electricity meters). As such, our numbers are going to be lower. The disappointing number for Internet users was verified, at the event, by a representative from Robi Axiata, who claimed that based on their data, unique internet user penetration remained at 18%.  “You are not that far off,” he said. Michael Foley concurred, referring to our 13% penetration figures.

Conversation focused on data cost, which was among the major barriers to adoption and use, according to the report.

“We are a very lean organization,” said Michael Foley, pointing to the fact that not only Grameenphone, but all operators providing telecom services in Bangladesh are squeezed dry of financial resources.

“Tight conditions and inconsistency on the part of the regulator is stifling Bangladesh telecom,” added Mahtab Uddin Ahmed. 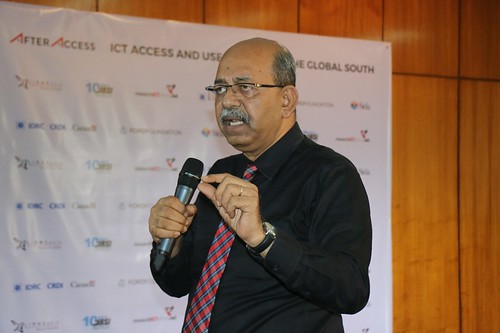 “For such a small country, is infrastructure sharing too much to ask?” questioned Abu Saeed Khan, by way of a solution.

“No. It is not too much to ask,” responded Brigadier General Md. Mustafa Kamal, “and it should have been done a long time ago.”

Even passive sharing is often barred in Bangladesh.

This was followed by a discussion of how monopoly or duopoly backhaul providers are making it difficult for operators to access capacity.  And how even to repair fiber owned by telcos, third parties have to be used, causing significant delays.

Sixty-seven percent of Bangladeshis aged 15-65 who do not use the Internet said the main reason for not using the Internet is that they do not know what it is. This finding highlights the importance of creating awareness on the Internet and its uses among the population. As Taimur Rahman stated, digital literacy is an important part of the Banglalink agenda.

“The gender gap in Bangladesh is pathetic,” said Helani Galpaya, pointing to the fact that women in the country are a whopping 62% less likely to use the Internet than men. “This is the worst gender gap we have seen in all the 18 AfterAccess countries so far, and matches that of the far poorer country, Rwanda.”

Other key findings from the Bangladesh report:

The press release for the event is available here.

The full slideset presented at the event is available here.