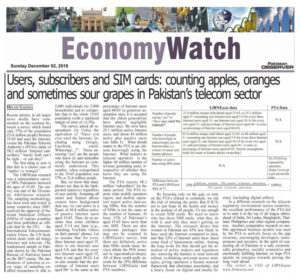 This is an opinion piece written by LIRNEasia’s CEO Helani Galpaya, published in the Economy Watch section of the Pakistan Observer on Sunday, 02 December 2018.

An excerpt of the piece was published online.

The original text which was submitted to the publication is given below:

Recent articles in all major news media have commented on the contrast between a survey which found only 17% of the population (21.6 million people) between 15-65 had used the Internet, versus the Pakistan Telecom Authority’s (PTA’s) claim of 58.3 million “Internet subscribers.” Surely both can’t be right – or can they?

The first thing to note is that this is a classic case of “apples vs oranges”.

The LIRNEasia research was a representative survey of 98% Pakistanis between the ages of 15-65. The survey was part of the 22-country AfterAccess research. The sampling methodology has been tried and tested in many countries since 2007, received the approval of National Statistical Officers (NSOs) of various countries and been published as official data by the ITU,  – the International Telecommunication Union, the UN body which deals with all things Internet and telecom. The randomized sample in Pakistan drawn by the Pakistan Bureau of Statistics based on the 2017 census. The randomness of selection at every stage of sampling enabled researchers to talk to 2,000 individuals (in 2,000 households) and to extrapolate that to the whole 15-65 population (with a statistical margin of error of ±3.3%).

The survey asked all respondents (in Urdu) the equivalent of “Have you ever used the Internet, including using Google, Facebook, email, WhatsApp…?”. Those answering “yes” are the people who know of, and remember using the Internet as commonly understood. This number, when extrapolated to the 15-65 population was 17% or 21.6 million people.

The PTA reports 58.3 million “subscribers” for the same period. The PTA reports what mobile operators report, and mobile operators report active data-using SIMs. But the number of SIMs is not the same as the number of humans. At least 13% of Pakistani’s aged 15-65 have more than one SIM. There are also corporate packages that may not be counted in LIRNEasia’s survey. And there are definitely active data SIMs inside many devices (think the POS terminal in supermarkets/shops). All of these could easily account for the 25% difference between LIRNEasia and PTA numbers.

By focusing only on the gap, or only on the PTA’s refusal to comment, we run the risk of missing the point.  But if ICTs are to put hope in the hearts and money in the pockets of all people, it’s not enough to count SIM cards. We need to know who has those SIM cards, what they do with it, and why they aren’t getting on the Internet. The research shows that women in Pakistan are 43% less likely to have used the Internet compared to men, and that 12% of Internet users have faced some kind of harassment online. Among the long to-do list that should get the attention of policymakers and regulators are: removing the barriers to rural network rollout, re-thinking universal access strategies, giving operators a license renewal framework that eliminates uncertainty, and a heavy focus on digital and media literacy (including digital ethics).

In a different research on the telecom regulatory environment across countries, the excellent performance of the PTA led us to rank it at the top of all league tables, ahead of India, Sri Lanka, Bangladesh, Thailand, Philippines and other regional comparators.  Another comparative research on mobile app-based business models was used by the PTA to actively focus on the app economy, encouraging developers, entrepreneurs and investors. In the spirit of connecting all of Pakistan to a safe, economically productive, socially connective and emotionally fulfilling Internet, we hope PTA spends its energies towards paving the long road ahead.