LIRNEasia > Themes > Services for the Poor 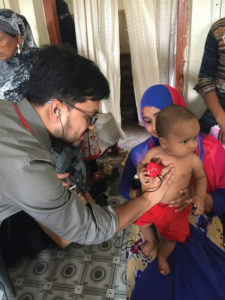 AI Assistance: A health worker in Bangladesh listens to sounds from a boy’s lungs with the help of the Johns Hopkins smart stethoscope, which cancels out extraneous noise and identifies telltale signs of pneumonia. Photo: Dr. Eric D. McCollum.

Retrieving accurate information from a patient’s body is critical for any treatment. And information technology has been greatly contributing to the advancement of diagnostic systems. Today’s physicians are manifolds empowered than their predecessors in terms of detection and intervention.

Affordability of diagnostic systems, however, remains the major barrier to universal healthcare. And it has been causing deaths at biblical proportion across the developing world. Researchers of Johns Hopkins University have chilling revelations:

Worldwide, more kids die of pneumonia and other lung ailments than from any other cause. These acute lower respiratory infections kill nearly 1 million children each year worldwide, causing more deaths than HIV and malaria combined. But fewer than 5 percent of people in the developing world have access to the X-ray imaging that’s considered the gold standard for pneumonia diagnoses. What’s more, many sick children never get to a clinic because they live far away from a facility, roads are in poor condition, and transportation is expensive. In sub-Saharan Africa, where most pneumonia deaths occur, only two in five children with pneumonia symptoms receive professional medical care. 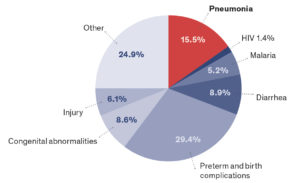 Global Killer: In 2015, about 5.9 million children died before the age of 5. Pneumonia accounted for 15.5 percent of those deaths around the world, and was the top cause of death in sub-Saharan Africa. Source: The Lancet, Volume 388, Issue 10063, December 2016

Given the global burden of these respiratory ailments, the World Health Organization has developed strategies for countries with limited resources. The guidelines for pneumonia diagnosis minimize dependence on any technological tools, and instead rely solely on observed symptoms of shortness of breath, cough, and rapid breathing. In hopes of saving lives, the WHO recommends antibiotic treatment for all children with these symptoms, with the result that half the children who get treated for pneumonia don’t really have it. This approach puts unnecessary costs on communities, and the unnecessary medication contributes to the growing problem of antibiotic-resistant bacteria.

The JHU researchers have picked up an “ancient” tool – stethoscope – to deal with this demon. This ubiquitous clinical tool has been hardly changed since its invention in early 1800. With funding from the National Heart, Lung, and Blood Institute, NASA, and the Bill & Melinda Gates Foundation – the researchers have completely reengineered the stethoscope.

They have weaponized it with digital sensing technology for sound capture, active acoustics for noise cancellation, and artificial intelligence (AI) to help health workers make accurate pneumonia diagnoses. The prototype has been trialed in Bangladesh, Peru and Malawi with exciting results. Commercial version of this smart stethoscope is expected to hit the shelf early this year. Read full report.

Public consultation on policy and regulation in water and sanitation services

LIRNEasia has been entrusted with the task of developing recommendations on how best to regulate Sri Lanka’s water and sanitation services, now a high priority for the government. Because WSS involves all three levels of government, and because many different parts of the state have to be coordinated for effective performance it has been decided that the recommendations should draw from public consultations across the country.

For those of us who have been thinking about e commerce and the reasons for people not taking to it in large numbers for decades, the COVID-19 related lockdowns gave much to reflect on. Below is an excerpt from something I wrote in the first weeks of the Sri Lankan lockdown in the Daily FT and also in Sinhala.

Few days back, I spent time at the Dompe District Hospital (a modest 100 bed hospital where people go for clinic visits but not for surgery) observing the impressive progress made in re-engineering work processes and introducing ICTs. The story is well told in Roar.