Uncertain of the answer, I thought I’d write about it.

Since Cable published their latest pricing league tables earlier this year my inbox seems to have a magnetic effect attracting ‘news’ from joyous announcements by the providers of the cheapest data in the world to harsh commentaries on the inaccuracy of the data being published. Following Cable’s release was A4Ai with its league tables published in March 2019 with prices for 100 MB, 200 MB, 1 GB, 2GB, 5GB and 10GB as a percentage of average income (GNI per capita reported by the World Bank). Both pricing leagues are relatively recent albeit more nuanced in some ways in comparison to the more seasoned data annually released by the OECD (with the limitation that this is only for the OECD countries) and the International Telecommunication Union (ITU).

Do we need this many pricing league tables for what appears to be the same thing? Perhaps not.

Is one necessarily better than the other? Perhaps not.

What do consumers of this data need to understand?

For starters and at the very likely risk of sounding like a record on repeat – methodology matters. What are you measuring? What are you comparing? And, What is your unit of comparison?

What I liked about the Cable method was that it brought everything down to what a GB of data costs (allowing for a clearer comparison), as opposed to how much it costs to use 1 GB of data. There is a fundamental difference in how the question is posed and how it is answered by those who collect and publish this data. In the ITU and A4Ai methods the price reflects the cost of a plan that offers at minimum 1 GB*. So for example, a price of a plan in India that offers 42 GB / month can well be equated to one in Sri Lanka that offers 1 GB / month, as long as it is the cheapest option available for a consumer to use 1GB per month, offered by the service provider with the largest market share in terms of number of subscriptions.

Data from operator websites with price converted to USD (as of today via OANDA) state:

In this case the monthly cost in Sri Lanka appears cheaper. However, the cost per GB (which in this case mounts to ~USD 0.05) is cheaper in India.

But does such a thing exist?

No. As a user who needs only 1 GB / month, in India I will not be able to purchase a GB for USD 0.05, because there is no service that offers a GB of data at this price. I will have to buy the cheapest plan available, and using the example above, is the plan for USD 2.15 that gives me 42 GB of data a month I don’t need but still have to pay for.

Perspective matters, too. And, there is no wrong angle.

If your intent is to understand the ground truth and to answer questions like “how much does it cost to get online” then the ITU and A4Ai methods are best suited. If you just want a comparison of data costs as a commodity, then the Cable method works. The issue I saw in both the A4Ai and Cable methods was that it seems prices reported were sans tax – a vital component in total cost of access that affects adoption and use.

Affordability is a whole different ballgame. We fool ourselves when we measure price as a percentage of GNI per capita. We assume every present and potential internet user’s income equals what the World Bank reports as 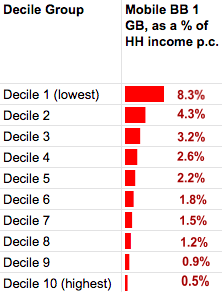 a country’s GNI per capita. This is a fundamental flaw in measuring “affordability”. But the lack of access to better data forces international and regional organizations to resort to what is available. The issue is when policies are based on these flawed benchmarks. For instance, the Broadband Commissions target and the A4Ai’s benchmark of “1for2” state that 1 GB of data should cost less than 2% of GNI per capita. Going by this, Sri Lanka is well within the threshold. However, a closer look at price as a percentage of average monthly household income per capita, reveals otherwise.

So Sri Lanka may tick the box of SDG target 9c that calls for universal, affordable internet access by 2020. However it’s only the highest deciles that make the cut.

* Hypothetically, this will actually depending on which price basket is being measured. A4Ai has 5 baskets, and the revised ITU mobile broadband basket is for a minimum of 1.5 GB.