The Sri Lanka-specific findings of the AfterAccess surveys were released in Colombo today, in the presence of members of government, civil society, industry, and media. Key highlights from the event included that Sri Lanka does not perform as well as expected, on digital indicators, that awareness of internet and related services does not translate to use in the country, and that the majority of social media users in Sri Lanka think that blocking social media during times of national unrest “is the right thing to do”.

Sri Lanka punches below its weight on digital indicators

Sri Lanka does not perform as well as expected on the adoption of internet and related services compared to its economic peers and even some poorer countries, our AfterAccess surveys showed.

Seventy-eight percent (78%) of the population aged 15-65 owned a mobile phone, according to the survey, beating India, Pakistan and other countries in the region. But it is the lowest from among its economic peers such as Argentina (91%), Ecuador (84%) and Guatemala (88%). Forty-seven percent (47%) of these mobile phones were smartphones, placing Sri Lanka behind its poorer neighbors Nepal (52%) and Cambodia (48%).

Sixty-three percent (63%) of Sri Lankans aged 15-65 said they had never used the internet. This indicates, again that the country performs worst from among its economic peers and on a par with much poorer countries Cambodia (64%) and Nepal (66%). 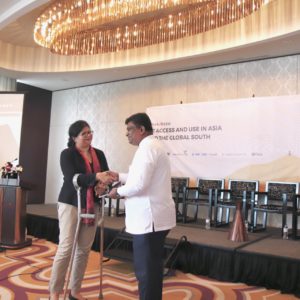 The findings were released in our report “AfterAccess: ICT access and use in Asia and the Global South” in Colombo, today. The report was formally presented to Hon. Ajith P. Perera, Minister of ICT and digital infrastructure by our CEO, Helani Galpaya.

“We need correct information to make correct decisions and the internet and social media play a critics role in this,” said Minister Perera, following the presentation of data. “In a time when people don’t trust each other or their sources of information, we can trust LIRNEasia credibility to give us the right and useful information.”

The findings from the research (conducted with methodology comparable across all 23 countries included in the AfterAccess surveys conducted by DIRSI, LIRNEasia and Research ICT Africa in Latin America, Asia and Africa with funding from the International Development Research Centre (IDRC) of Canada, the Swedish International Development Cooperation Agency (SIDA) and the Ford Foundation), were presented by Senior Researcher at LIRNEasia, Ayesha Zainudeen.

Awareness of internet-related services, especially e-commerce, does not translate to use

“What the data shows us is a low conversion of awareness to use in the country,” said Ayesha Zainudeen. 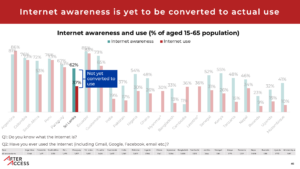 Awareness of the internet has not translated to use, in Sri Lanka. AfterAccess

“The current education system does not value independent research and only requires memorization,” said Chairman of the ICT Agency, Prof. Rohan Samarajiva by way of one explanation, during the panel discussion which followed the presentation of results. “The internet is thus made irrelevant.”

Maithree Malwattegoda, General Manager of Sarvodaya Fusion affirmed Zainudeen’s and Prof. Samarajiva’s statements by recounting her experience at the grassroots of Sri Lanka’s population. “The key issue we see when we go to schools and villages is a lack of awareness. Young people use social media and other internet-enabled services but much of the time, their parents don’t know anything about it. And it’s true that people don’t use these services. We go to many schools where children are simply not even allowed to use the computer labs that are available to them.”

The data showed, predictably, that internet adoption was highest among the young, educated and affluent. Members of the audience, as well as the panel, agreed that awareness and adoption among the older population should be boosted, especially considering the aging population of Sri Lanka.

The trend of awareness not converting to adoption was also seen in e-commerce services. Seventy percent (70%) Sri Lankan internet users aged 15-65 said they had heard about platforms for buying or selling goods and services online. This was the highest reported number among the Asian countries included in the AfterAccess surveys. But only 43% of that group said they ever used such a service to make a purchase. 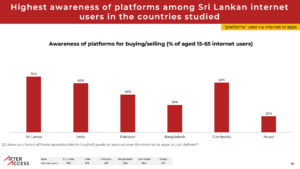 70% Internet users in Sri Lanka said they had heard of platforms for buying and selling goods and services online. This was the highest reported number in the Asian countries surveyed 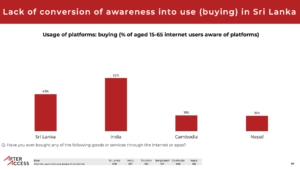 “Sri Lanka has a culture of not valuing time, and since convenience is a key benefit of e-commerce and other internet-related services, Sri Lankan’s don’t buy online much,” added CEO of Takas.LK, Lahiru Pathmalal. 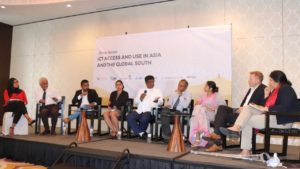 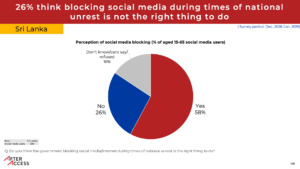 58% of social media users in Sri Lanka thought that government blocking social media during times of national unrest was the right thing to do.

“The findings are indeed surprising, and in no way do we seek to justify the use of social media blocks,” said Galpaya, who was also the lead researcher on the Asia component of the AfterAccess surveys. “The fact that citizens opted to connect through VPNs and other means raises the question of how effective these bans really are at quelling the spread of hate speech. People will find ways to communicate with their networks, so it does not necessarily mean that rumors and hate speech will be curtailed. It probably just means that they moved offline.”

“When social media is blocked people may resort to other platforms that cannot be monitored or controlled,” affirmed Harindra Dassanayake, Head of Research and International Media at the President’s Office.