Homagama, a town in the Colombo District in Sri Lanka, is officially classified as a rural area. However, a visitor to Homagama is sure to find this designation confusing; it lies just 10 kilometers off Maharagama, one of the most densely populated cities in the country. Large parts of Homagama are also densely developed, with buildings packed together.

Nevertheless, Homagama is classified as a rural area because it is administered by a Pradeshiya Sabha rather than a Municipal or an Urban Council. Officially, an area in Sri Lanka is considered urban if it is administered by a Municipal or an Urban Council. Any other area is considered to be either part of the estate sector or is considered rural. Going by this definition, Sri Lanka is one of the least urbanized countries in the world, with an urban population of around 18.2%. 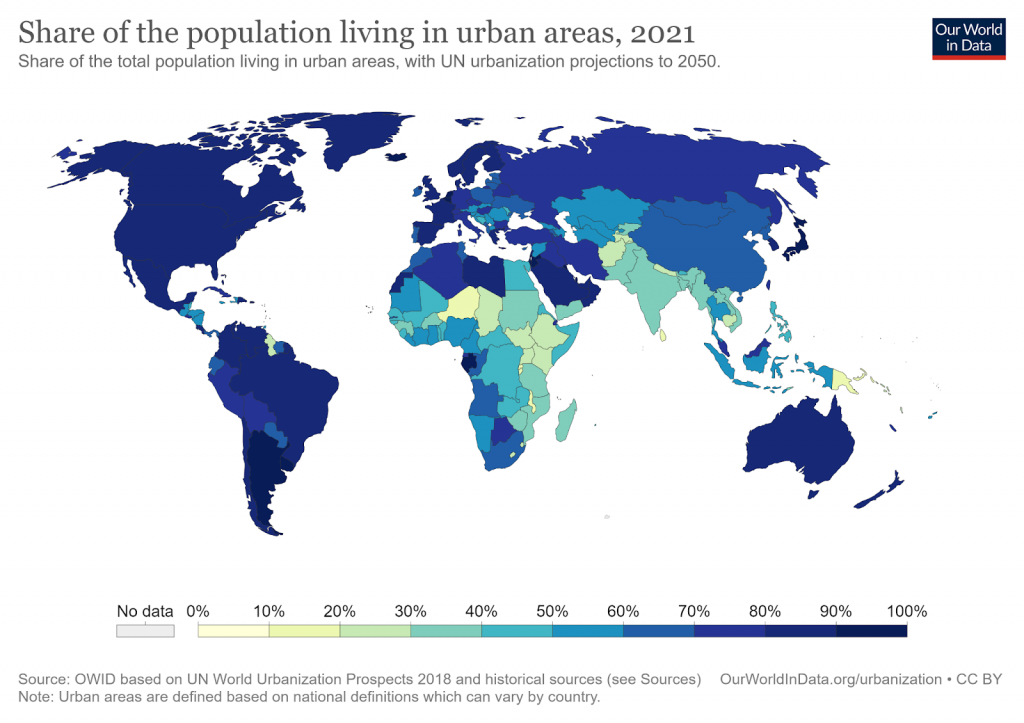 In fact, if one were to look at historical figures of urbanization in Sri Lanka, they’ll notice that Sri Lanka has experienced de-urbanization over the last 50 years. This is because, in 1987, the country changed its urban boundaries by abolishing the unit of ‘Town Councils’, resulting in an overnight reduction in its urban population. Since then, urban boundaries haven’t changed at all, and the population defined administratively as “urban” has experienced only limited growth. However, in reality, areas showing urban spatial characteristics have experienced rapid growth, especially at the peripheries of major cities. 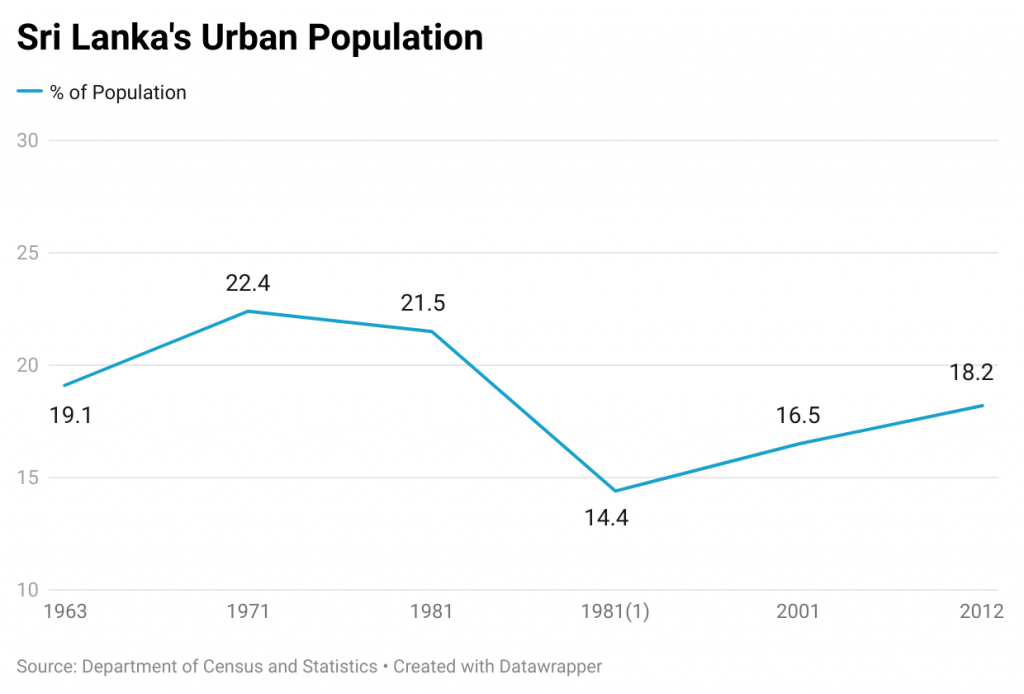 Further, according to UN Habitat, Sri Lanka’s urban population dynamics do not stack up against the economic growth it has experienced over the past several decades. Urban economists around the world have repeatedly shown that economic growth is highly correlated to urbanization. Sri Lanka, which has the second highest GDP per capita in the South Asian region, is the only country which has seen a reduction in the rates of urbanization over the last 50 years. 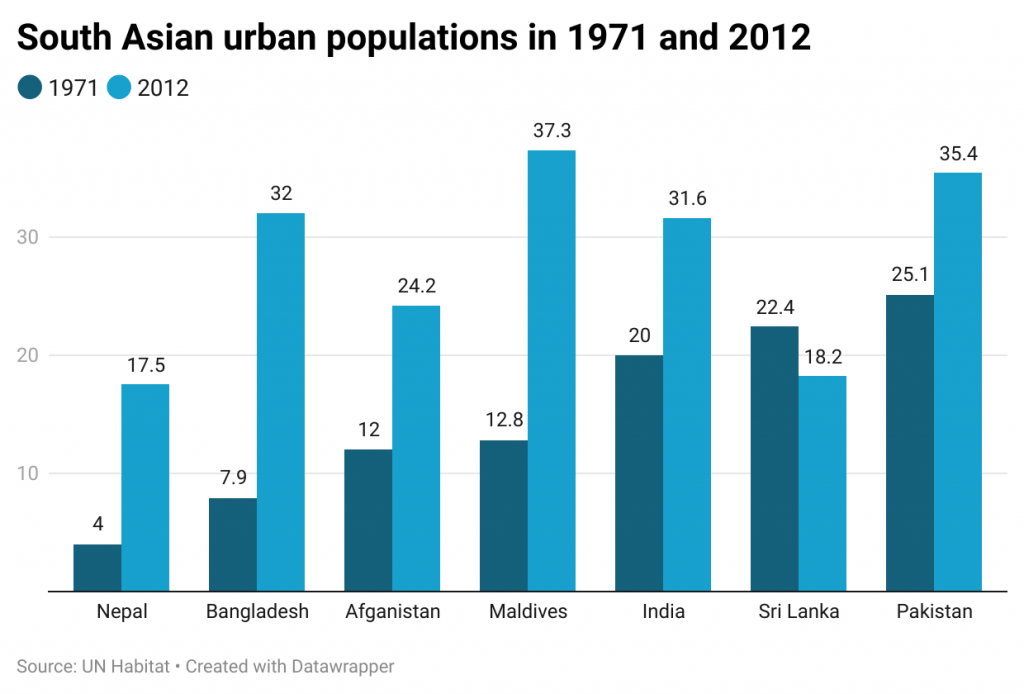 This mismatch of urbanization between official statistics and what’s observed in reality, is not just an amusing observation. It, in fact, poses significant problems in understanding and addressing urban challenges in Sri Lanka. For example, whether an area is urban or rural determines, among other things, how much money is allocated to maintain essential services, investments in new infrastructure projects, and how various levels of government respond to emergencies such as natural disasters or epidemics.

Given that the administrative definitions don’t seem to do a particularly good job at capturing what is truly urban in Sri Lanka, what other options do we have? How do we consistently identify and monitor urban areas? We know that cities are different from other types of land cover because they have a high concentration of houses, factories, parks and other man-made constructions. Therefore, if we can identify and quantify these man-made structures, we are likely to have a picture much closer to reality.

However, the traditional way of doing this – large scale surveys that can span a couple of years – is both expensive and time consuming. Therefore, urban planners and researchers around the world are now tapping into the enormous potential unlocked by freely available satellite imagery. This collection of techniques, also known as remote sensing, is particularly suited for studying cities: it allows for quick data acquisition over a large geographical area, gives access to data spanning several decades into the past, and makes it easier to digitally process and analyze images in combination with other complementary datasets.

What we are doing

For remote sensing practitioners, there has never been a more exciting time. They now have access to  high-resolution satellite imagery, open source tools to analyze the data, and analytics platforms such as the Google Earth Engine which provides both extensive sources of data and massive computational power to conduct planetary scale analysis. We, at LIRNEasia, are currently in the process of leveraging these possibilities to conduct what we believe to be the first comprehensive mapping of urban areas in Sri Lanka at the 10-meter resolution.

However, we are not starting from scratch. We are building off the work of many others who have noticed the discrepancy between the administrative definition and the ground reality and proposed alternative definitions (See Notes). However, to the best of our knowledge, this is the first attempt to generate a comprehensive urban map of Sri Lanka using high resolution (10m) satellite imagery, free and open-source tools and no dependence on census data. We believe this is important because it allows for the generation of high-resolution urban maps at regular intervals at minimal cost, which is crucial for continuous urban monitoring.

How we are doing it

In order to do this, we are building machine learning models (which are now accepted to be the state-of-the-art in remote sensing) to distinguish between urban and rural areas. At its simplest level, a machine learning model learns a function from a representative sample of data, which it then uses to perform the task of classification, which in this case is distinguishing between urban and rural areas.

Therefore our first task is to build this representative sample of data, also known as ground truth. For this we leverage Google’s Hybrid Map layer which maps every single place on earth at less than 1-meter resolution every six months. Then we comb through a year’s worth of satellite images, filter out the bad ones and engineer the features to build the best machine learning model. Finally once we have our best model we test it against a separate sample of ground truth to make sure our models are performing as we want them to. If the results are unsatisfactory, we go back and make adjustments to different sub-components of the process described above at a high-level.

To test the validity of our methods at small-scale, we started with the Colombo district – for which we have best visual intuitions – as our preliminary area of interest. Our initial goal was to map built-up areas and non-built-up areas, which is the basis for distinctions between urban vs rural. We used satellite imagery at 10-meter resolution for the year 2020 provided by the Sentinel Mission of the European Space Agency. For this work, we have trained the Random Forest classification algorithm, via the free and open-source GIS tool QGIS which combines a graphical user interface with powerful machine learning capabilities. 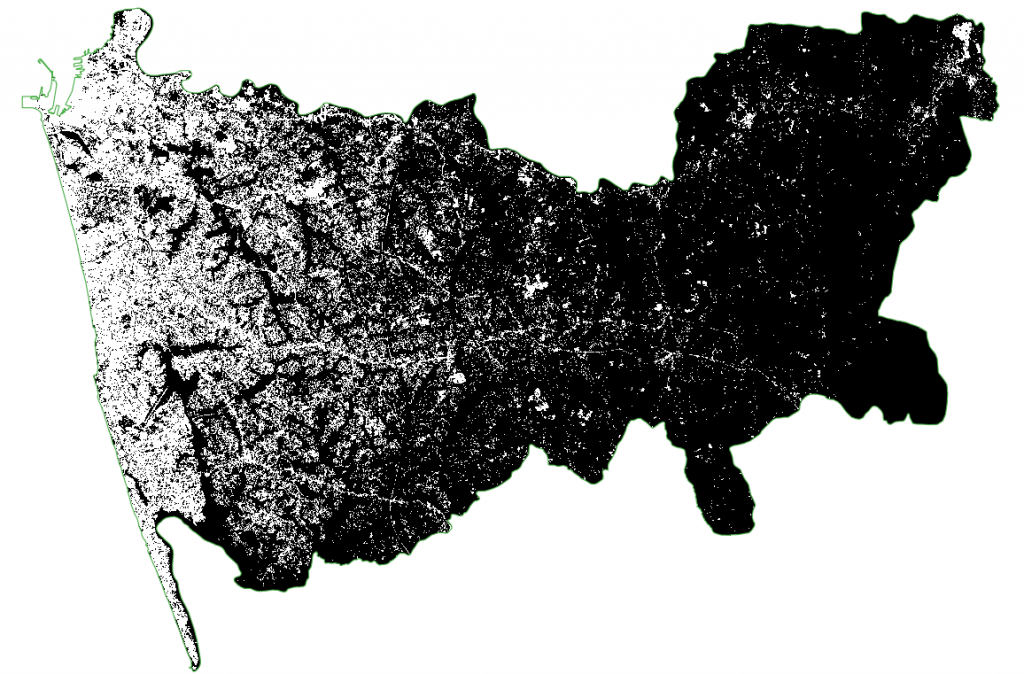 The results have been encouraging. The initial accuracy assessments showed us that the model was accurately identifying built-up areas from non built-up areas nearly 90% of the time. More importantly, we visually compared this output against high-resolution Google imagery and were satisfied with how well it seemed to capture built-up and non built-up areas. We believe that those who are familiar with the city of Colombo will also share this sentiment.

Going forward, we will be improving this work in a few specific ways. First, we want to extend the mapping to cover the entire country. Second, we intend to use the distinction between built-up and non-built-up areas to map urban land cover in a more standardized fashion. For example, the UN Habitat has proposed a universal definition of urban areas which accounts for the building density in a given area, rather than separating based only on individual buildings. Finally, we want to understand how Sri Lanka’s urban land cover has changed over time. To that end, we will be using imagery from the Landsat mission, which over the last 5 decades, has provided researchers and practitioners around the world with 30-meter satellite imagery.