The draft National Digital Policy proposes a target of 70% of internet users by 2025, an undeniably ambitious target. The target – pulled out of thin air as though it may seem – is actually based on a time series forecast using ITU statistics from 2000-2017. The forecast was computed using a statistical software called Tableau, which considers exponential smoothing and seasonality. The lower and upper levels were based on 95% confidence intervals.

The chart below shows that the upper limit that can be achieved is 74% by 2025 if accelerated efforts are made to drive internet adoption and smartphone use in Sri Lanka.

If we continue along the same trajectory with nothing done to drive internet use, we may reach 59% by 2025.

If somehow conditions worsen making things harder for people to get online, then we may reach just 45% of internet users in the next five years, which would be a very abysmal target for one of the richest (in terms of GDP per capita) countries in the South Asian region. 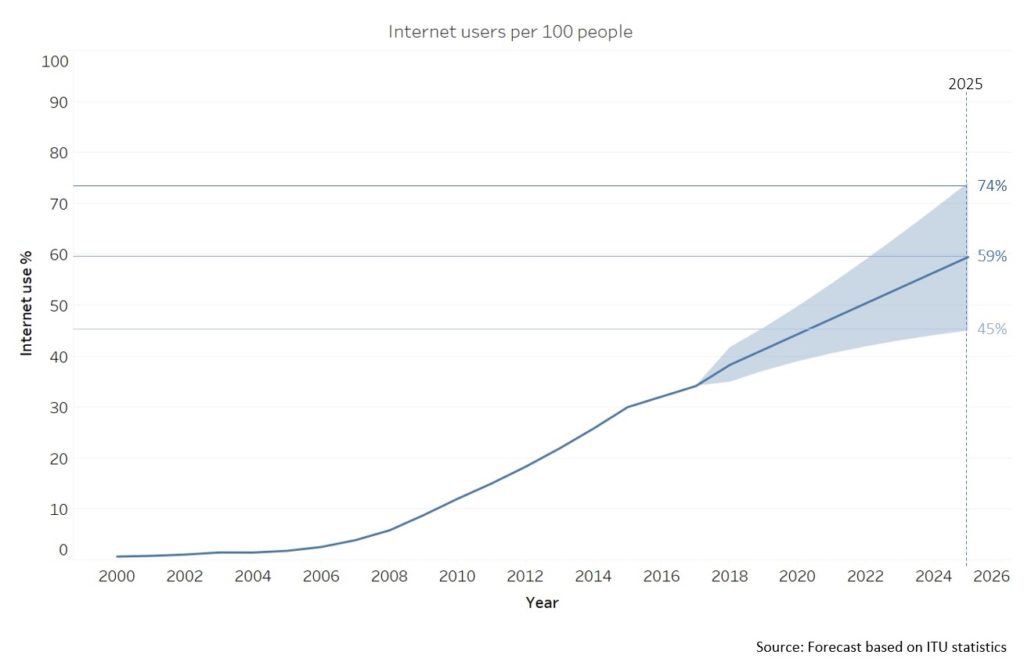 Granted, ITU statistics on internet use may not represent ground realities given that it is based on the numbers provided by the national regulatory authority and may even involve a multiplier (based on the assumption that there may be one device but many internet users).

But findings from LIRNEasia’s AfterAccess survey in Sri Lanka seem to corroborate the low ITU internet use figure of 34.11% (2017). The nationally-representative demand-side survey results showed that just 37% of those who owned mobile phones actually made use of the internet in 2018.

A National Digital Policy must be aspirational and should identify a set of clear policy actions to bridge the digital divide that currently exists. Internet user numbers in developed countries generally tend to be around 80% and over, so it could be argued that the target of 70% identified in the Sri Lankan policy document is acceptable after all – not too high and not too low – given the structural and institutional difficulties that the country faces. One must be cognizant of the fact that the proposed target cannot be linked to one singular activity, which is why the modular structure/approach of the national policy emphasises a cross-Government effort.

To start off with actions related to affordability and literacy must be prioritised to ensure that users are able to get online and are able to benefit from doing so.

LIRNEasia’s internal computations show that for 60% of the population, mobile data services remain unaffordable, amounting to more than the 2% threshold identified by the UN Broadband Commission for what is considered affordable internet. This is indeed a shame particularly since Sri Lanka has been credited with some of the cheapest per minute mobile tariffs in the world since the early 2000s. What makes these services unaffordable are the ever-increasing service taxes that have been imposed over time: data taxes amount to 19.74% and taxes on voice and SMS are prohibitively high at 37.7% – among the highest in the South Asian region.

To make matters worse, just 40.3% of Sri Lankans are said to be digitally literate. In reality, these percentages are likely to be lower than reported given the poor definition adopted by the Department of Census and Statistics. The creation of a digitally empowered workforce, government service, and academia with access to lifelong digital learning opportunities will be critical to the development of the country.

Other areas that need to be addressed include the deployment of high-quality digital connectivity across the island, the fostering of a trusting digital environment to ensure internet users are comfortable sharing their information over these networks, and having access to relevant services and applications in local languages.

If any or all of these issues are left unaddressed, Sri Lanka runs the risk of falling behind, potentially reaching the lower level target of 45% as per the forecast. This will have serious implications on the country’s long-term prospects, in terms of economic prosperity and in achieving its sustainable development goals.

It is clear that Sri Lanka must do all it can to get its people online in the next five years.