LIVE FEED: Colloquium: Initial findings from the Base Line Sector Analysis of the BPO Industry In Sri Lanka 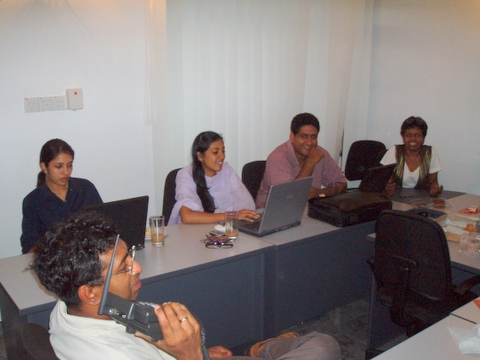 The Information and Communication Technology Agency of Sri Lanka (ICTA) and LIRNEasia have partnered to conduct an in-depth baseline sector analysis of the BPO sector in Sri Lanka, to assess its direct, as well as indirect impacts on the country, and to identify opportunities and constraints for its growth.

The preliminary findings of the analysis will be presented at the colloquium. The finalized country report will be available publicly and it is envisaged that it would constitute an essential input in the formulation of effective policies that would catalyze sector growth.

The study tries to understand three main areas – infrastructure, labor and govt provision of services. For example where the industry is today, what kind of jobs have been created, the infrastructure issues part with electricity and communications, the HR issues (whether there are enough people and whether these people had the necessary transport etc to to come into work, etc), tax relief, etc.

What is a BPO?
A BPO is defined in this study as an independent entity that took on an entire process that was outsourced (eg: HSBC Call Center). This excluded the software (eg: Virtusa) and garment industries (eg: MAS).

Nuwan – as in garment sector, is a cost center considered a ‘BPO’?

The company has to be an ITES & separate legal entity to be considered in the survey; resultantly, only less than 30 companies were eligible, and 21 were surveyed.

Astron was the first BPO (entered in 1983, previously known as ‘Data Entry International’). In the earlier days, they used to do data entry, but they were not online at that stage. It is one of the largest employers; presently, Astron & HSBC are the largest employers ; other BPOs don’t employ large numbers. Some of them have as little as 3 employees only.

Can it be concluded that a lot of these companies come in as BPOs only to enjoy the tax holiday they get?
Harsha – The tax incentives have been available since 1989 and I don’t think this has had any effect on the spurt of BPOs opening up in 2003-2005.

The final study will try to relate the policies that may have affected (if at all)the sector to the growth in the sector.

Sujata: Is there a difference between offshore and onshore employment? Dilshani: This will be covered in detail in the final report.

Services on offer: Almost half the companies offer accounting services.

Most of the BPOs in SL are non-captive (not a part of a parent company; they bid for work independently); this may explain the concern for security in SL and SL’s image. THey are also concerned about transport facilities in the country.

Employment:
Astron & HSBC employ large numbers. Some of the others are planning on increasing employment ; but when they have 2-3 employees and increase it by 2-3 more people then the growth rate will be 100%, which may be misleading cause their sizes are very small.
Harsha: we can ask BPOs how many years they have been in existence and ask them how many employees they have

Nuwan – is ther a correlation between the number of employees & investment, turnover (e.g 3 employes could be running 10 servers, which is a lot of work!)

Dilshani – we tried to find out turnover in terms of export earnings but they have not responded.

Helani – perhaps SL is just a location for many small BPOs, unlike india who has many big ones. Is there a difference in the reasons for setting up in SL between offshore & onshore? Why would local BPOs locate themselves in Sri Lanka? It can’t be cheap labor and operating costs, can it?

Dilshani – there were no differences in the reasons cited between the two groups. its cost based.

Sriganesh (in Chicago)- even in india, altho offshore investments are large, ..>??? Its the policy environment that encourages BPOs to locate. Eg. getting land.

Nuwan – we started much later than India; shouldn’t we compare india at year 1 with SL at year 1, rather than india & SL in year 2006.

Harsha – we don’t have the data.

Sriganesh – anomalies in the data? e.g. most companies say they give compulsary training in speech/language. why is this necessary, unless the BPOs are predominantly call-centers?

Divakar – what are the policy persepectives that can be taken from this? what can be done from a policy perspective to encourage BPOs? what barriers can be removed?

Harsha – Zoning – e.g have BPO parks or zones. this will for e.g sort out the transportation problems, along with other infrastructure problems.

Divakar – in SL we don’t have the scale of operations to make transportion for BPO workers economical.

Luxman: Infrastructure issues will depend on scale of operations.

Dilshani – the political environment at the time of survey (straight after terrorist attack on army chief) may have impacted the results (high concern for security situation in country, law and order and also maintaining SL image abroad)

Siganesh – perhaps the data can be verified against BOI data and ITESA.