Licenses have been granted to consortium members for building the Palapa Ring–backbone that will connect the Eastern part of Indonesia that currently relies on satellites with the rest of the country. It is not clear how the licenses were granted and what are the fees and obligations of the license holders. Furthermore, technical and financial feasibility studies are yet to be completed. No access regimes have been developed that will govern how non-consortium members will be able to access the Palapa Ring and on what terms. There couldn’t be a worse possible way of launching such a complex, capital-intensive project that is supposed to transform the ICT infrastructure of Indonesia.

President SB Yudhoyono’s government came to power on the promise of eradicating corruption and the “deal culture” that has plagued Indonesia throughout much of its existence. Initially the government promised leased-cost subsidy auction and other open transparent methods for rolling out backbone infrastructure in the country. Now a sudden announcement in the media informs us that licenses for the Palapa Ring project have been granted.

The Palapa Ring has been a “dream” project of the Indonesian government even before the financial crisis of 1997. Before the crisis it was planning on funding it with government funds. Post the financial crisis and faced with empty coffers, the Government has been pressuring telecom operators in Indonesia to use their resources to realize the Government’s dream. The enthusiasm of PT Telkom to participate in the Palapa Ring Project (in news story below) is ironic considering that it had decades to build backbone infrastructure in the country when it was the monopoly provider of domestic fixed line services and it built little. I wouldn’t be surprised if the threat of regulatory retribution hung like Damocles’s sword over Indonesian operators when they decided to participate in the Palapa Ring consortium.

Least-cost subsidy auction would have been a more transparent way of eliciting participation of Indonesian operators in the Palapa Ring Project. In those islands/regions that are commercially viable, backbones would be deployed by private  sector without any government support. In islands/regions that are sparsely populated and where landing submarine cable may not be commercially viable,least cost subsidy auction would have provided the necessary subsidy to make it worthwhile for private sector to participate in infrastructure roll-out.

Although the sum of $1.5 billion is being bandied around as the total cost of the project the consortium has yet to commit to the backbone map that DGPOSTEL and the Indonesian government has been promoting. The map as can be seen below has submarine cables landing every few kilometers as they garland the various islands. The highest cost-component of a submarine cable system are the cable landing stations.The proposed design is not cost-efficient. It would make more sense to land a submarine cable at couple of points in an island and use terrestrial fiber optic or microwave to connect the rest of the island. 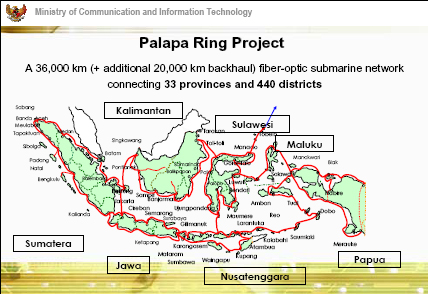 Indonesia’s director general for post and telecommunication at the communication and information ministry, Basuki Yusuf Iskandar, said the group will meet next Wednesday to discuss how to implement and finance the Palapa Ring Project.

The Palapa Ring is part of the government’s effort to refurbish the country’s ailing infrastructure to spur economic growth in the world’s fourth most populous nation. Its completion will open up telecommunication access to eastern
part of Indonesia, the less developed area of the sprawling tropical nation.

Telkom’s president director, Rinaldi Firmansyah, said the company will become the majority contributor to the project and lead the group as it would use most of the telecommunication traffic through the network.