Assessing the General: How did the Pakistan telecom sector do in 2002-2008? 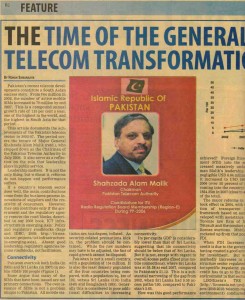 A few days ago, we learned that Major General Shahzada Alam Malik (Retd.) had stepped down from the leadership of the Pakistan Telecom Authority. We believe that his seven-year tenure at the helm of the PTA merits an assessment. It begins thus:

Pakistan’s recent telecom developments constitute a South Asian success story. From two million in 2002, the number of active mobile SIMs increased to 79 million by end 2007. This is a compound annual growth rate of 115 per cent a year, one of the highest in the world, and the highest in South Asia for that period.

We fully realize that readers, especially from Pakistan, may have varying views on whether or not Pakistan’s telecom sector was transformed, whether the PTA played a constructive role, and whether Major General Malik provided good leadership. We have made our assessment based on the available evidence. We welcome comments and debate.